Cinnamon Walnut Coffee Cake is super moist with rich layers of toasted walnuts, cinnamon and cocoa powder. The broiled glaze takes this cake over the top. 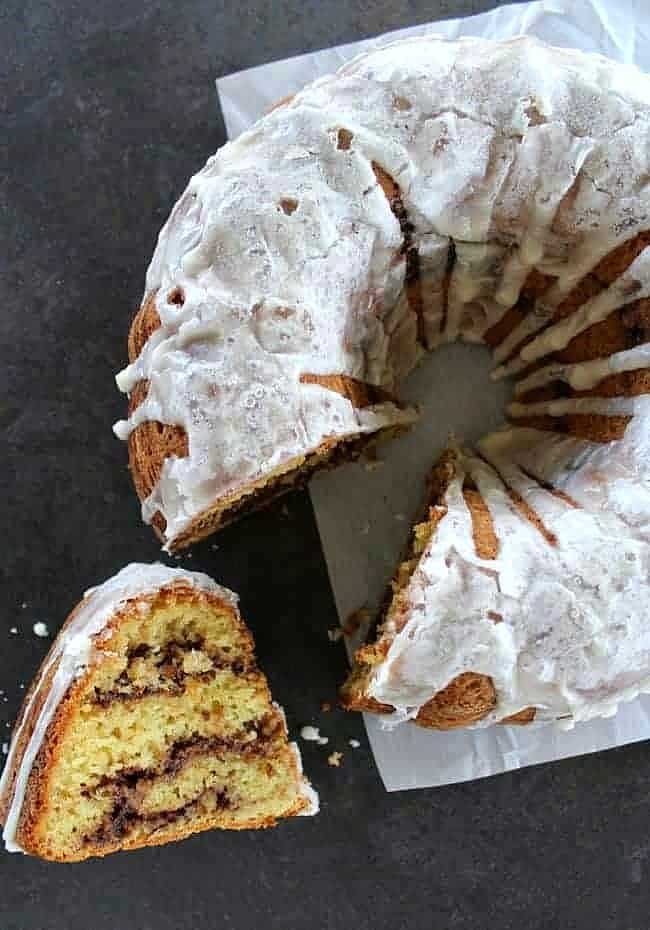 Coffee cake is meant to bring people together. Meant to be shared. Never meant to be for a party of one, right? Well, this is THE ONE for conversation-stopping raves, to be served at any get-together, formal or casual. I am not kidding.

When I first tested this, I wasn’t having any kind of party so I called a couple friends and my mom and told them to come grab a hunk of the circle and give me feedback. One of my friends wanted me to call it A-mazing Coffee Cake and my dad has probably called three times in a week either telling me it was the best cake he’s ever tasted or to tell me to enter a baking contest with it. In other words, he’s been buttering me up so I’d make it for him again, and soon. 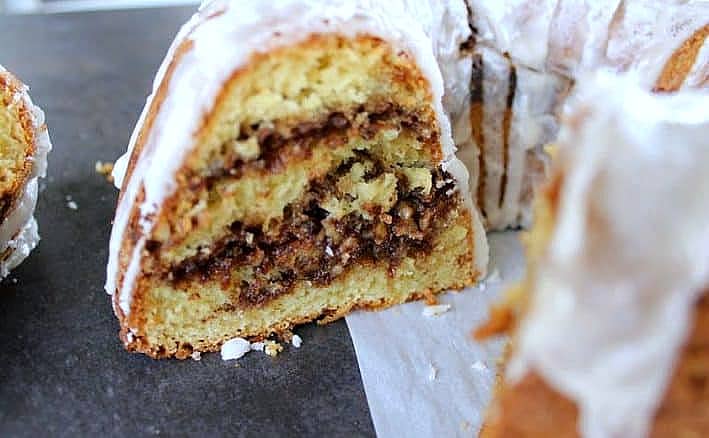 This Cinnamon Walnut Coffee Cake starts with an incredibly moist but dense butter cake with sour cream to add subtle tang in every bite. The filling is a simple yet (dare I say?) PERFECT mixture of brown sugar, cinnamon, cocoa powder and toasted walnuts. Chocolate is not recognized in the taste so much as it adds an unmistakable richness. If I’m trying to find some health benefits to this decadent delight, well cinnamon, dark chocolate and walnuts fits the bill here. (Yes, it’s a stretch but I’m sticking with it.)

Finishing the cake is my ramped-up version of a simple sugar glaze. Made with powdered sugar, pure vanilla extract and a touch of hot milk, drizzle the glaze over the ridges of the Bundt cake and then pop it in the oven under your broiler just until the glaze starts to bubble on top. This step will give the glaze a subtle crispness but also deepens the vanilla flavor within the glaze. Plus, I think broiling the glaze gives it that country bakery, made from scratch, “this is special” kind of appearance.

And it really is special. Cinnamon Walnut Coffee Cake will keep for two days (wrapped airtight), but if you can, serve it warm out of the oven. And cut the pieces large, because one skinny piece is not going to be enough – for anybody.

Oh, and what I said earlier about coffee cake never being for a party of one? Well, you go right ahead and pour yourself a cup of coffee, tea or milk and eat the last piece of this cake all by yourself. Because I know I will. 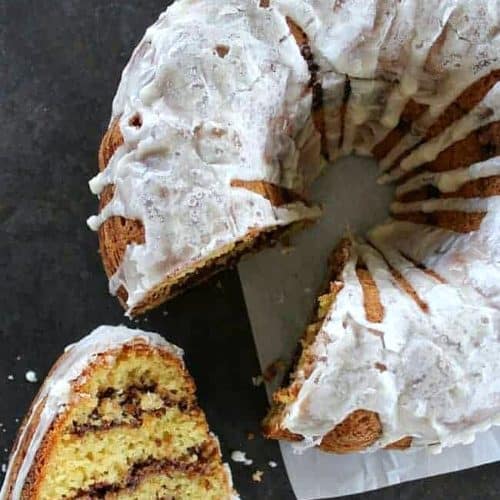 For the Cinnamon Walnut Layers:

Before you start the recipe:

Recipe adapted from Maida Heater’s Book of Great Desserts. And if you like to bake and don’t know about Maida, then run to your local library or book store and pick up ANY of her cookbooks.