The addition of cottage cheese to this nicely spiced apple cake makes it so moist and adds a bit of zing to the cinnamon, ginger and cloves. 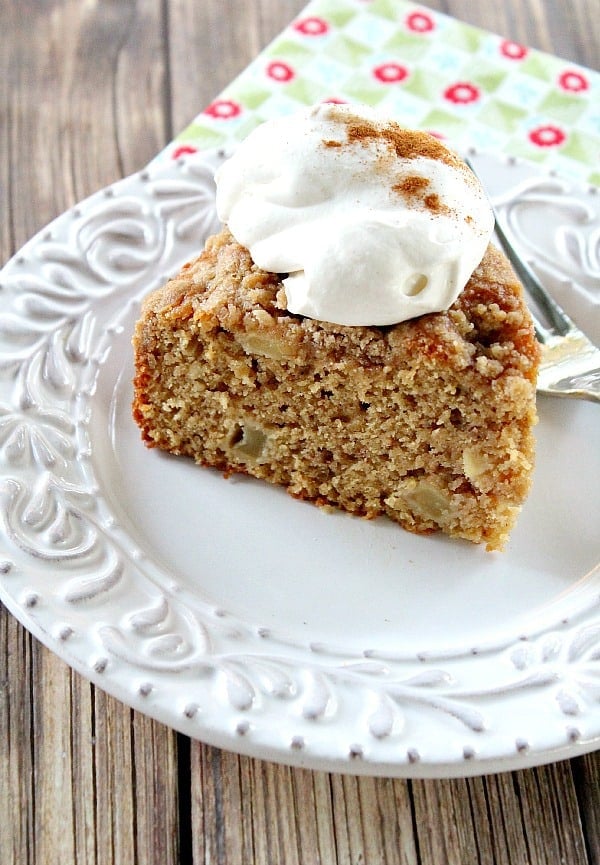 This is a glorious cake that is super moist thanks to the addition of tangy cottage cheese. But even better are the spices of cinnamon, ginger and cloves which make every bite reminiscent of pumpkin pie but with the rich texture of a melt-in-your-mouth coffee cake. Topping the cake with cinnamon whipped cream is a must. Served warm or room temperature, it was inhaled by my family. 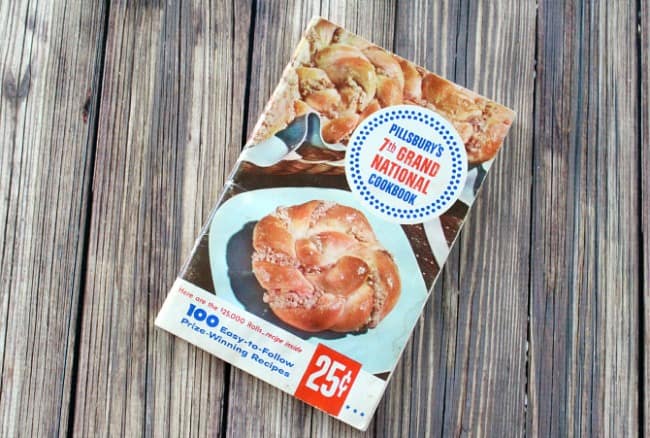 …I found this book stashed away in a cupboard several years ago when we moved into our current home. Pillsbury’s 7th Grand National Cookbook, it was high up on a shelf and some of the pages were stuck together, not to mention it was aged and yellow. I fell in love with it on the spot! The booklet was published in 1955 and reading through it was quite an entertaining little glimpse into homemaking for American women of the past. Here was a compilation of recipes from winners and runners-up who participated in the contest held in “the Grand Ballroom of the Waldorf in New York…97 women entered, as well as 1 man and 2 teen-aged boys”. The first pages of the book give contest information for the following year’s Grand National Competition. Ann Pillsbury assures us that “Juniors, Seniors or Brides can win!” The black and white photos of some of the contestants are adorably right out of Happy Days and short bios are also included with some of the recipes. Hobbies of the home-bakers ranged from “photography, doll-collecting, writing, and entertaining for my bridge club ” with my personal favorite, “inventing household appliances and creating new recipes”. I will be updating several recipes from this booklet to share with you and I’ll feature the original author’s photo (if there is one) as well as the bio, when one is provided.

The originator of Cottage Apple Spice Cake (no photo) was a “Junior” Winner named Felicia Schroetel from Portland, Maine. No bio was given for Felicia, but this is one delicious little recipe! I updated some of the ingredients and simplified steps in the recipe. Almost every recipe in the book calls for Crisco as an ingredient which I will switch out with more healthy options. For instance, I’ve substituted with coconut oil in this recipe. Cook’s note: I’m a huge fan of good fats but others might want to remove fat from the recipe. If this is you, than Cottage Apple Spice Cake would be an excellent candidate for using applesauce in place of the oil. 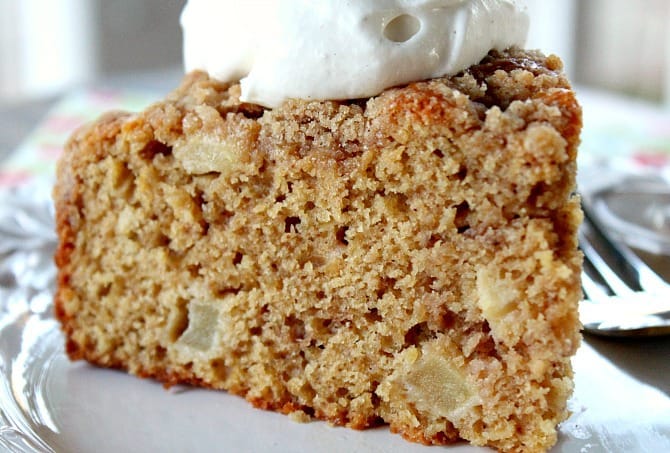 The moist chunks of apple practically melt in your mouth and the streussel topping that I added gives a nice crunch to the top. The original recipe calls for beating cinnamon into classic whipped cream and it is my new favorite cake or pie topping. Super simple, but the addition of the cinnamon gives even more festive-flavor to the cake. It’s perfect when served with coffee or tea or for an after-dinner dessert.

I hope you enjoy my updated version of Felicia’s recipe, almost 60 years later. 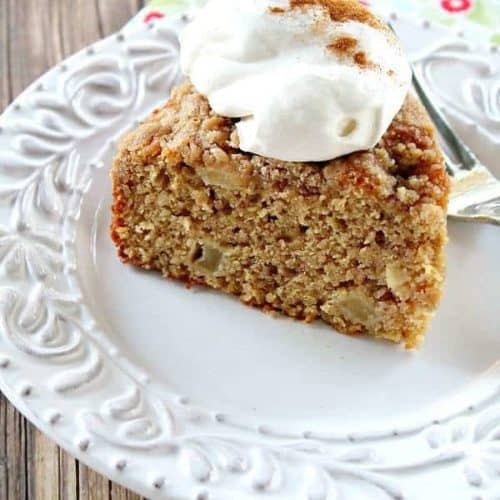