When I told some lunch girlfriends and you virtual-friends that I’d be posting slow cooker recipes this entire month, I was amazed at the positive response but I shouldn’t have been surprised at all. CrockPot made it’s way on the scene more than 40 years ago, fast forward and today most households in the US own at least one. With good reason because who doesn’t love dumping a bunch of ingredients into a pot, leaving for the day, coming home and dinner’s on? No one, Mrs. Obvious. Today’s cook certainly loves his or her slow cooking CrockPot or other brand of slow cooking appliance (all CrockPots are slow cookers, but not all slow cookers are CrockPots). That being said, slow cookers are not truly just dump “whatever” in the pot and voilà! several hours later, amazing-magical-delicious-dinner is served! And not every recipe can be converted from oven to slow cooker. I repeatedly get asked if a recipe that I’ve shared using the oven or stove top can be made in the slow cooker. The answer is, sometimes but not always and then modifications need to be made to the process. There are a few rules and tips for getting the most satisfaction not to mention the food-safety factor, out of your slow cooking appliance. Actually there is a lot of information out there, but here are some good tips to cover the basics for best results. 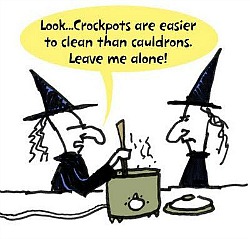 Use the right size slow cooker for the job

Slow cookers are available in sizes from 1- quart to 8 1/2- quarts. Use the size cooker recommended in each recipe. This helps ensure that the slow cooker isn’t overflowing or underfilled, so that your meal can cook properly (a slow cooker should be filled to at least half-full, but not more than two-thirds full). Most slow cooker recipes seem to be geared to a 5- to 6-quart slow cooker, and slow cookers in the 1- to 2-quart range are best used for keeping dips and sauces warm at a buffet and nothing more, really.

For recipes like lasagna, and macaroni and cheese, cakes and the like, prep your slow cooker by placing two pieces of aluminum foil that have been sprayed with cooking spray, placed perpendicular to make kind of a sling. Then after cooking, easily lift out your prepared meal for easy cutting rather than it spooning out of the cooker. For most other recipes, spray vegetable oil on the inside of the insert before adding ingredients, especially sweet or custardy-type recipes, to prevent burning and sticking (disposable slow cooker liners are popular and awesome! but not practical for every recipe). If your appliance has a hot spot (most do and it’s usually the back of the cooker), think about adding a foil collar to the back of the slow cooker before adding the food. Fold a piece of aluminum foil into about 6 layers long enough to cover the back half of your slow cooker.

Many recipes benefit from microwaving the aromatics (like onions and garlic) and spices to bloom their flavors. This takes just 5 minutes and is easier than getting out a skillet to cook these ingredients.  Blooming the aromatics, helps eliminate the “slow cooker bland taste” that results in some recipes. Any recipe that uses mushrooms benefits from starting the mushrooms in the microwave because this will help release some of the moisture in the mushrooms allowing them to not be rubbery and ensuring your dish isn’t soggy.

Vegetables that you want to retain their color and some crispness are better added towards the end of cooking, like frozen peas, baby spinach, chopped tomatoes. These can turn mushy when added at the beginning of cooking. Adding these during just the last few minutes, ensures they are perfectly tender, but not desintegrated. Sour cream, milk, and yogurt should always be added at the end of the cook time, usually just before the last 15 minutes.

Let your oven be the finishing or beginning touch, sometimes

Two of my most popular slow cooker recipes, Slow Cooker BBQ Chicken Wings and Baby Back Ribs in the Slow Cooker, both finish in the oven and it really makes a difference to add a bit of crunch or char to certain recipes. Other recipes,  like Party Meatballs with Raspberry Balsamic Glaze, start in the oven before cooking in the slow cooker.

Cook on low whenever possible

Sometimes, the fact that a recipe can cook all day while you’re away is exactly what you want, while other times you might get a late start or just want it done as soon as possible. Most recipes give both options for cooking on Low and cooking on High, but recipes cooked on low are more moist and tender at the end of the long cooking time than recipes cooked on high. So, especially when you want a really tender roast or beef stew, try to plan ahead and cook it on low. This is also why using fatty cuts of meat (Chuck roasts, short ribs, pork shoulders) do well on low in the slow cooker.

Speaking of cooking a recipe in your slow cooker “all day”, this really should not apply when cooking chicken. Whenever possible, cook chicken on low for up to 6 hours but no longer (yes, even when cooking a whole chicken), unless you want dry, stringy chicken. If you need to cook poultry for longer than that, consider wrapping the chicken in aluminum foil and laying on top of the other ingredients in the slow cooker, if it makes sense in the recipe. America’s Test Kitchen supports this tip by saying that “wrapping chicken pieces helps it to cook more slowly because it’s not sitting in the liquid, and it allows you to make tender chicken soups, stews, etc. while protecting the chicken somewhat.”

Brown your ground meat before placing in the slow cooker to ensure a tender and not grainy texture. Also, a weird and little used method to ensure your ground meat is not tough or sandy (yuck!) by the end of a long cooking time- is to make a panade, a mixture of bread and dairy, and add it to your meat before browning. Simply mix together bread crumbs and milk, then gently combine it with the ground meat before browning it. Makes a huge difference. (Now you know that adding bread and milk to your meatballs before cooking isn’t just to prevent the meatballs from falling apart.)

For safety reasons, the internal temperature of meat or poultry should reach 140 degrees (the temperature at which bacteria cannot grow) by the 2-hour mark in the cooking time. When you first start using your slow cooker, it’s a good idea to check the temperature after 2 hours to be sure this is happening (this might be even more important if you’re using an older slow cooker). If the food doesn’t reach this “safety-zone” when cooking on Low, you might be able to solve the problem by starting with the High setting for the first hour or so. This is why putting frozen meat or other frozen food in with meat into any slow cooker is dangerous because it’ll dramatically increase the amount of time it takes for the food to reach the safe zone. *Source: America’s Test Kitchen

Keep the lid on!

Even though most of us know this, it’s hard sometimes to resist the urge to take off the lid and peek at your meal. Opening the slow cooker lets heat escape and slows cooking. Only open it 30 to 45 minutes before the low end of the cooking range to check doneness.

There you have it, I could go on but then I’d lose you and I think the tips I’ve listed are good for getting you through most slow cooker adventures. I hope you learned a few tips you didn’t know before and I’d love to hear some of your own best practices when utilizing the wonderful slow cooker. Most important of all, friends… 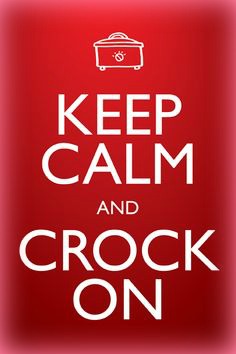 This post may contain affiliate links, which will add no extra cost to you. Thank you if you make a purchase – it will help support my blog!