Smoked Salmon Chowder is a tasty one-pot dish, ready in 30 minutes but tastes like you spent hours preparing it. Great weeknight or company fare. 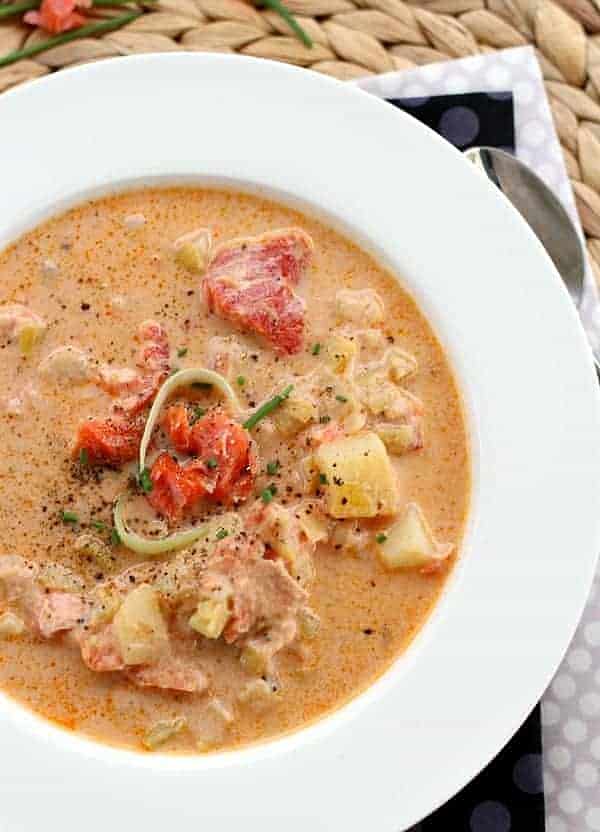 Smoked Salmon Chowder may become one of the best recipes I’ve made so far. This dish will impress even the most discerning palate and can be made to perfection by any level of home cook’s expertise. If you like clam chowder, you will LOVE this. If you like salmon and don’t care for clam chowder, you will LOVE this. But the best reason to LOVE this recipe? It’s so flavorful and could not be easier to make.

What makes something a chowder?

Chowder is a soup that often features seafood, starts with bacon and a mix of vegetables- definitely including some sort of onion, potatoes, and often celery. As chefs and home cooks have become more creative, the use of seafood and bacon in the chowders isn’t always the case, like corn chowder, or many vegetarian chowders. Almost all chowders are creamy, except Manhattan Clam Chowder, which has a tomato base. All chowders are soups, but not all soups are chowders :).

What are the ingredients in salmon chowder?

The base for this chowder starts with sliced leeks, crushed garlic and chopped celery, and carrots. Then creamy russet potatoes, are added along with a mixture of vegetable broth and milk that binds all the flavors together for that yum factor we all crave. And last but not least, flaky smoked wild salmon adds richness and tender texture. It does require a little heavy cream at the end too, but how can you go wrong with that? Adding additional whole milk or half and half is fine, too. If you want your chowder to be closer to classic, you can also add a little cooked bacon at the end as well. Something that isn’t in this clam chowder if flour or corn starch commonly used as thickening agents. This recipe doesn’t need an of that to make a perfectly creamy, thick broth.

This chowder was so easy that I was skeptical it could yield the complex flavors I was hoping for. My first go-round with the original recipe did not offer enough of the delicious broth for the last couple of servings, so I had to make a few adjustments until each bowl had the right balance of chunky ingredients plus enough flavorful broth to accommodate several dips of hearty bread. 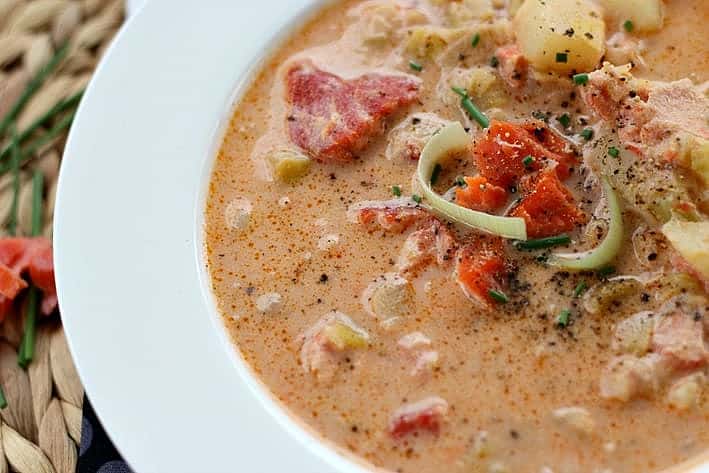 The natural oils from the smoked salmon infuse into the broth for uncompromising flavor. Serve with extra salmon sprinkled on top and some fresh chives or dill if you like. I’ve made this so many times now and even a few times in the same week to adjust and develop the recipe. This process usually makes my taste-testers tired of a recipe when I’ve made it so much in a short period, but this was the first time they welcomed the same dish on even the third night within a week.

By now it’s obvious that I really want you to try this recipe, because once you do you won’t be disappointed. Cozy up to Smoked Salmon Chowder on a cold winter night or serve it as the star of your next holiday get-together. 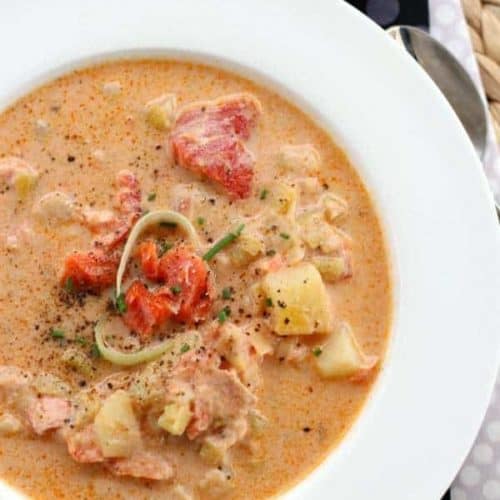 Smoked Salmon Chowder comes together in less than 30 minutes, is made in one pot, and tastes like you spent several hours putting it together. Be careful when heating the chowder at the end after adding the cream. Don't let it boil too hard or the cream will separate.
Course Soup
Prep Time 5 minutes
Cook Time 20 minutes
Total Time 25 minutes
Servings 4 -6
Calories 469
Author Sally Humeniuk