Raising backyard chickens is easier than you think, and the fresh eggs taste delicious. But more rewarding than that is having chickens as pets throughout the experience.

Keeping backyard chickens is not uncommon in suburbia America these days. And after chicken-sitting for our neighbor from time to time and deciding that owning backyard chickens is something fun for our family*, but also thinking how great it would be to get fresh eggs every day, we decided to join the trend. In previous posts here, I chronicled the building of our chicken coop and bringing home three Buff Orpingtons that we named Ginger, Matilda and Scarlett. I suspected they’d be a nice hobby for getting fresh, truly free-range eggs, but I had no idea just how unique and funny these little pullets’ personalities were until we started caring for our own little critters.

Once we got the girls home, there were a few days of drama, especially after realizing our chickens were afraid of the dark and also finding out that and one chicken was extra curious during the day. Spending the first weeks of life under a bright, warm light and being able to huddle together with about twenty other chicks made two out of the three of them a little shy about exploring the big outdoors. But finally, with a little coaxing using bright, shiny objects…

…our chicks came out into the world. Once that happened there was no holding them back. Instincts had them making dirt baths on their very first day out, all the while chirping away. Well, they pretty much chirped constantly no matter what they were doing. 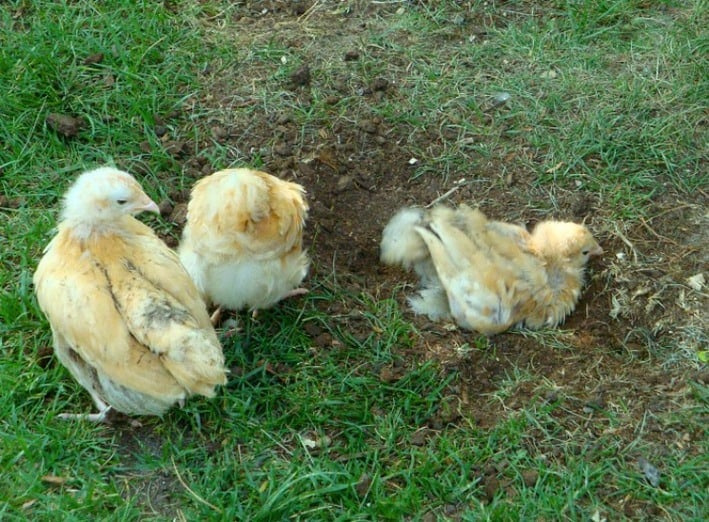 The first several nights in the coop, they still searched for the light. Perching at one of the coop’s windows was a favorite night-time spot until they quickly became too big to sit there. 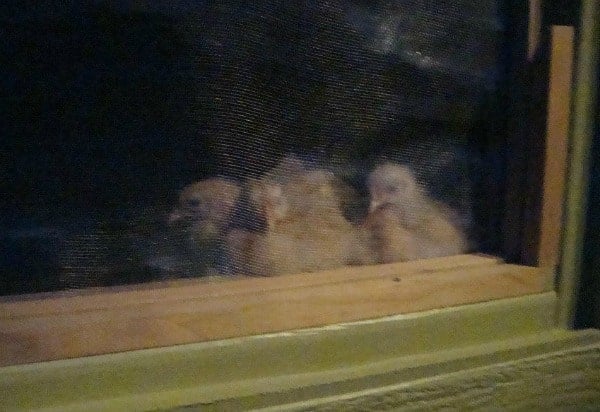 Ginger, the extra curious one, quickly found a perfect spot to better view the world. Even now, this is a regular routine when Ryan visits the chicken yard. I’m fully expecting her to poop on his head some day. 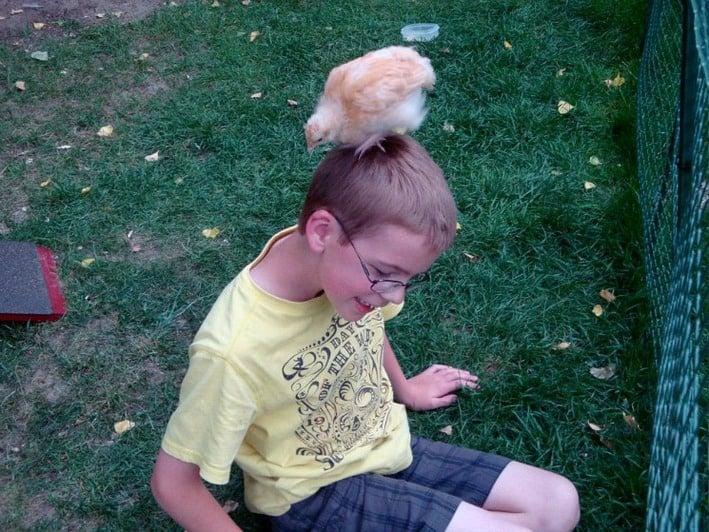 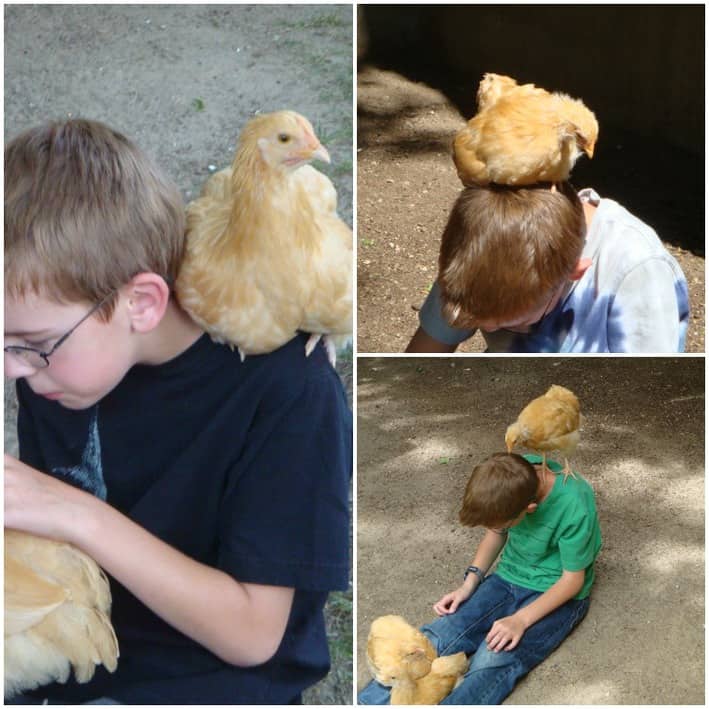 One member of our family had a different interest in these little space invaders. Zelda didn’t appreciate not being allowed past the fence where these nuisances lived, who were now taking up some of the time and attention she usually enjoyed from us, and they were also causing strange instincts to try and take over every fiber of her being. In one photo here, her entire body is shaking while she tries to harness what nature is telling her needs to be done to take care of business. But she continued to show great restraint and now that the chickens are bigger than her- plus have tried to chase her- PLUS have pecked her hard on the nose once… they have lost their status as prey and have been elevated to bullies. 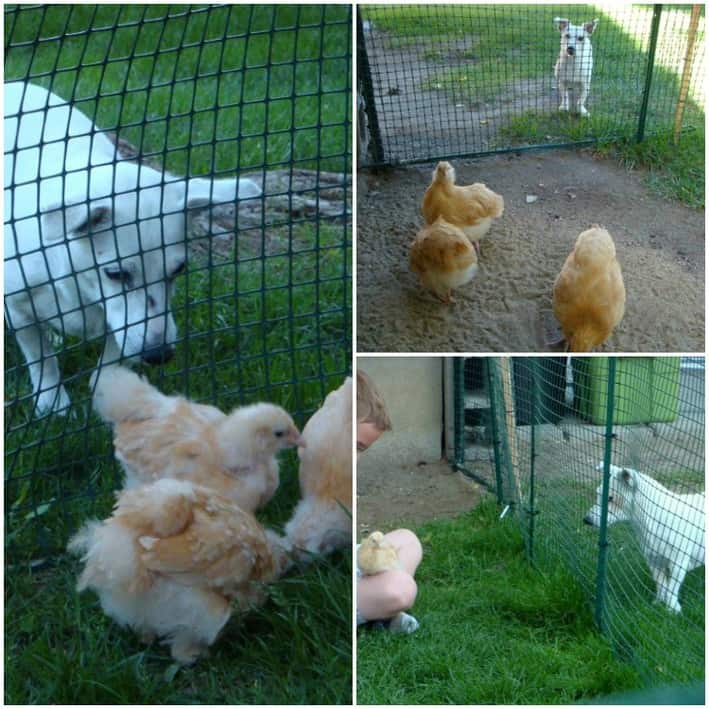 Every day our chickens seemed to get bigger and every day their individual personalities became more distinct. Slowly, their little chirps changed and became deep and throaty, their eyes went from blue to gold to red, their down was replaced with beautiful ginger-colored feathers, and the next thing we knew, we had full-grown chickens within a matter of months. 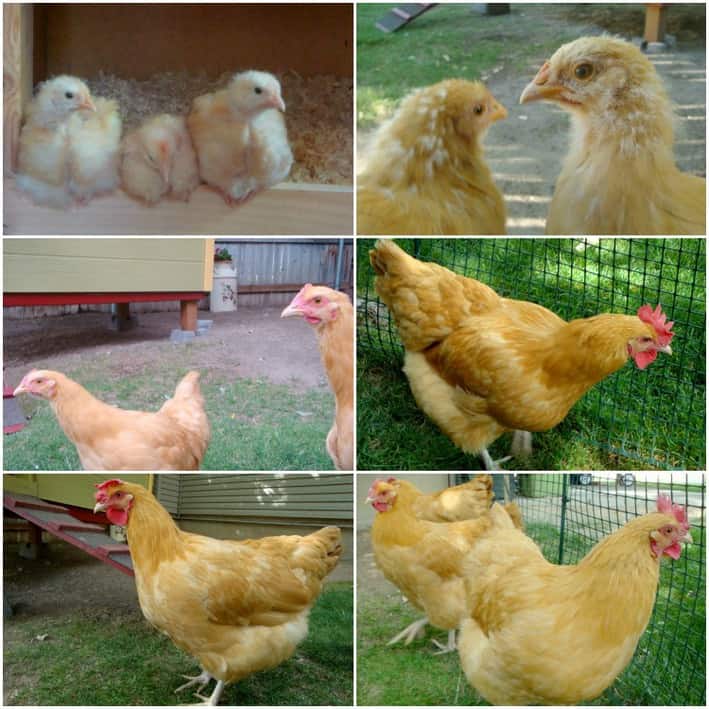 In the next “exciting” installment about our backyard chickens, I’ll introduce the girls individually and share the moment that was most important to my husband, as he would remind me from time to time was the real reason we got chickens in the first place. But, just so you know, we’ve found our three little chickens to be incredibly interesting, social, unique and funny. They’re very smart and also very stupid, depending on what situation they’re in. And we’ve learned a lot and grown a lot, right along with Ginger, Matilda and Scarlet. 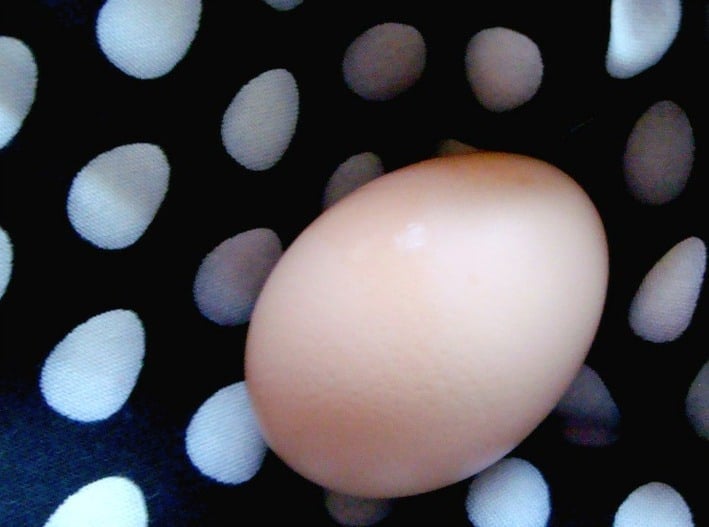 *If you’re considering becoming a backyard chicken “parent”, do a lot of research before you take this on. It can be very rewarding, but is also a lot of work, and not for everyone. Many people easily get in over their head with the project, have buyer’s remorse and then are stuck trying to re-home the chicks they no longer want. This can be difficult and even end in tragedy for the chickens, as introducing new hens into a flock isn’t easy and sometimes people who want to take the chicks off your hands have other uses in mind (like food for their large reptiles, among other things). While doing your research, let me share a good starting point with Backyard Chickens-Beginner’s Guide.  Leonard Bartlett, editor and contributor at Backyard54.com does a really good job getting you started with questions to ask yourself and resources to point you in the right direction. Also, Backyard54.com is a wonderful site for all things garden, pest control, animal care related, and more! The site isn’t just related to backyard chickens.

Feel free to reach out for any questions you may have about my experience as a “Chicken Mom”. My family loves having chickens as pets and maybe it’s a great idea for you too!