The title of this post should be enough grab your attention- but if you haven’t already jumped ahead to get started on the recipe, let me tell you these Chocolate Coca-Cola Cupcakes have intense chocolate flavor with a nice, light crumb texture. You really don’t taste the Coca-Cola yet there is a bit of zing from the Coke and that’s also what gives the cupcakes the almost-black color. 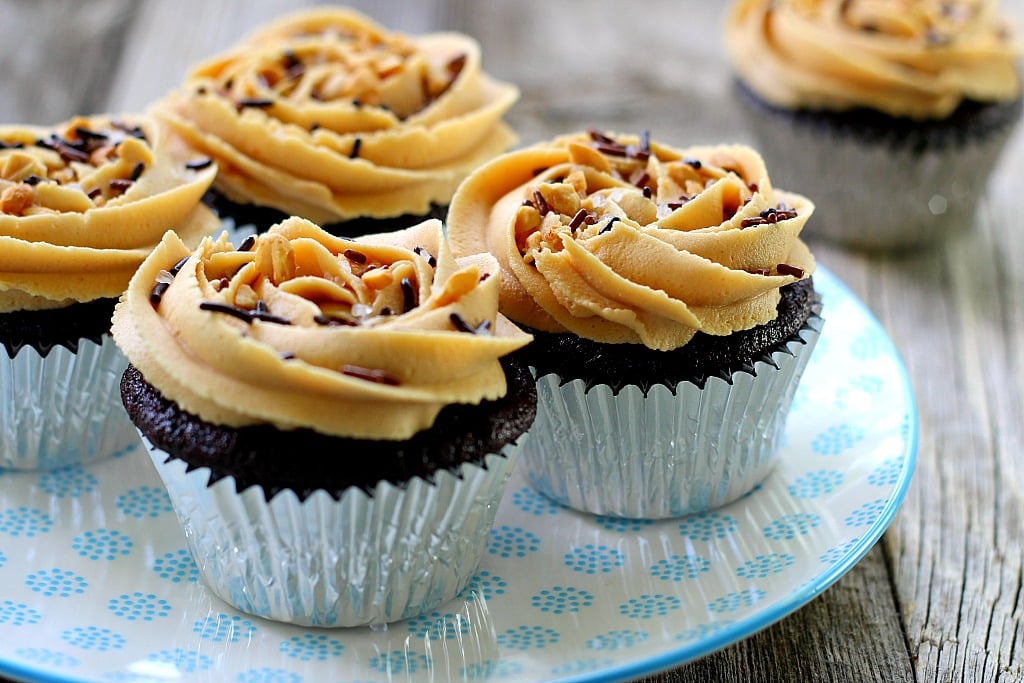 These cupcakes whip up in no time, using one bowl for dry ingredients and a sauce pan for everything else. Once combined, the batter is a bit thin but don’t worry, these bake up to an airy, chocolate cake. Paired with the Peanut Butter Buttercream Frosting, this is super easy to whip up while the cupcakes are baking. 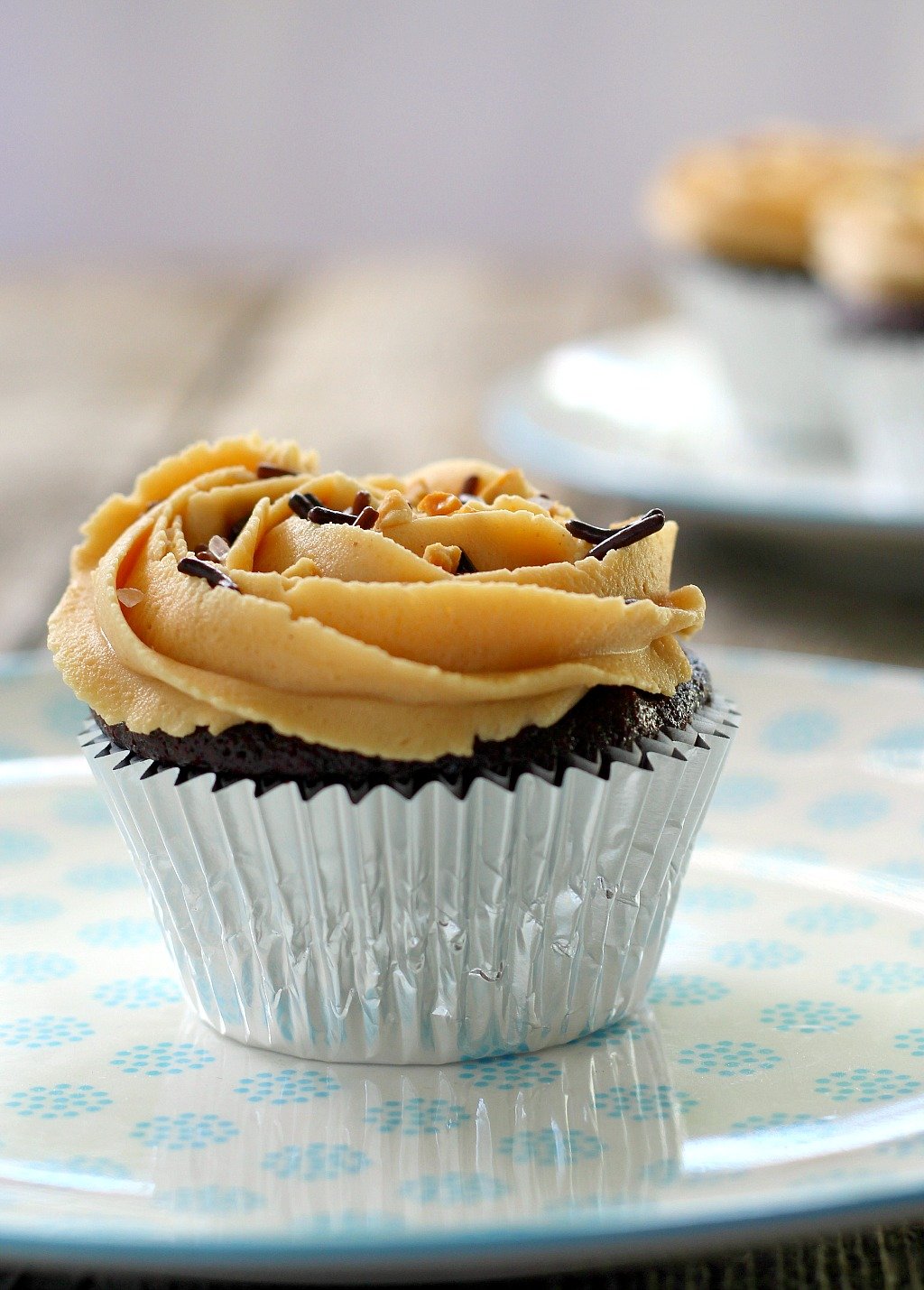 And speaking of the frosting! It’s downright dangerous. Go ahead, stare at that cupcake right up there and then tell me your mouth isn’t watering and you don’t imagine the creamiest most peanut buttery-est flavor. The frosting has Butter TWICE in the title! What more do you need to know?

I’ll sit these on the counter and when Dave comes home from work he’ll cut off a quarter of one of the cakes for a quick treat, and slowly (actually not very slowly) the rest of the cupcake disappears as well. And I get in trouble if I try and try to share too many with friends or neighbors. Irresistable. 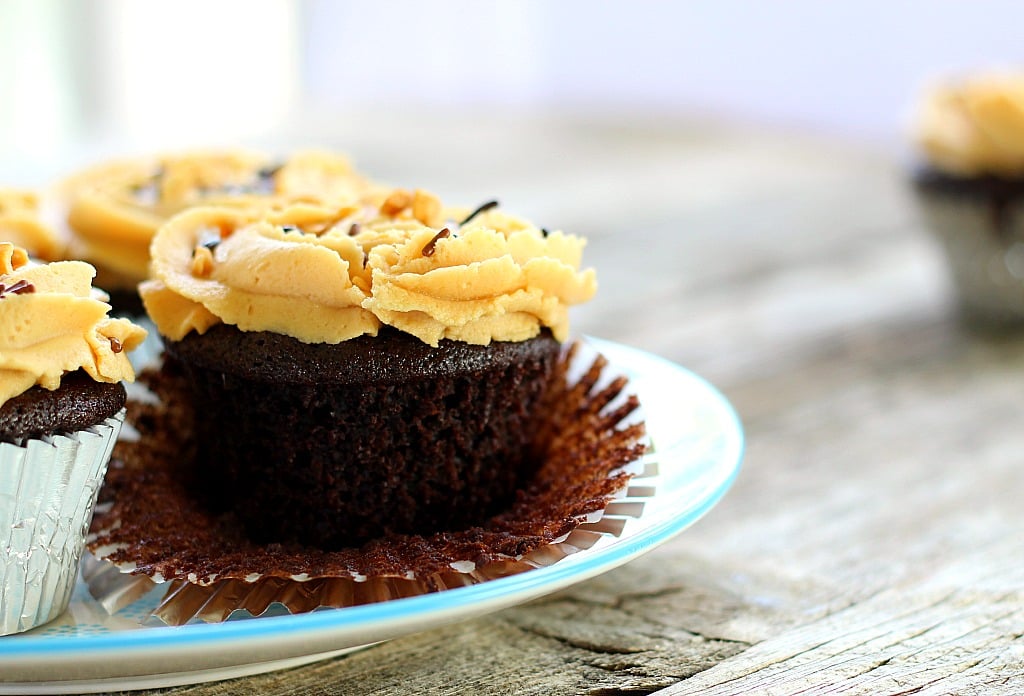 If you want a nice gluten-free option for this recipe, make my Gluten-free Chocolate Cake recipe and top it with the peanut butter buttercream. It is absolutely the best chocolate cake and no one will know it’s GF. Just read the comments on that recipe if you’re unsure. 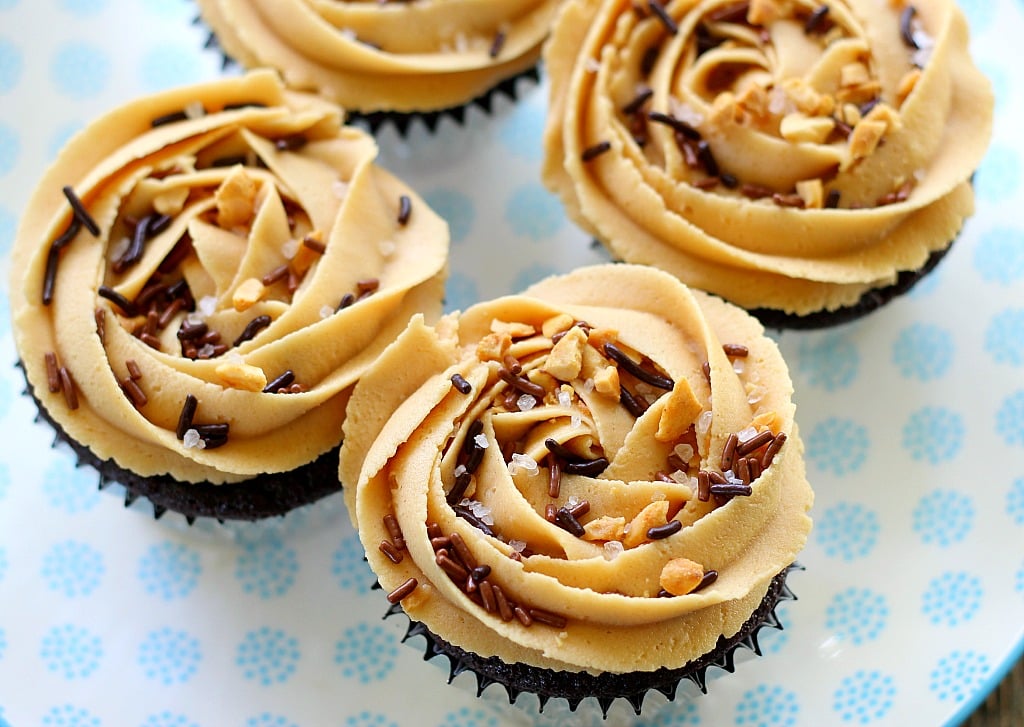 I made the cupcakes look fancy by piping the Peanut Butter Buttercream using a piping bag and simple star decorator tip, but you can also cut a 1/2-inch snip out of a resealable plastic bag and pipe your cupcakes with that and it’ll be equally as impressive. Sprinkle chopped peanut and some sel gris sea salt or any coarse salt you like. That extra little crunch of salt kind of melts in each bite and intensifies the rest of the flavors. I have to mention the chocolate sprinkles I used for this recipe because if you bake a lot you may already be familiar with Deruyter Chocolate Sprinkles. These are the real deal, made with real chocolate. Shown on the cupcakes are both the milk chocolate and dark chocolate variety.

Quick, easy, pretty and best of all, amazing. Chocolate Coca-Cola Cupcakes with Salted Peanut Butter Buttercream will be a hit at your next get-together. They stay fresh for about three days but they probably won’t stick around for three days. 🙂 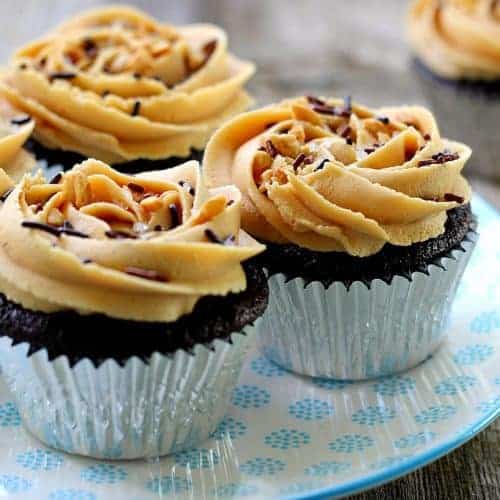 The Coca-Cola in this recipe adds a nice "lift" and light texture. Don't use diet Coke as it adds a funky aftertaste. The cake batter will be thin, but bakes into a tender crumb and deep, dark chocolate brown. The peanut butter buttercream frosting will become a go-to recipe to top many cupcakes, cakes, even cookies!
Course Cake
Prep Time 15 minutes
Cook Time 20 minutes
Total Time 35 minutes
Servings 12
Calories 243
Author Good Dinner Mom

For the Peanut Butter Buttercream