This moist brownie recipe is a classic recipe. Don’t be fooled by their simplicity. These are chocolatey brownies that you’ll make time and time again.

Moist brownies are the ultimate chocolate treat. And can you believe all the varieties of brownie? We have mint brownies, salted caramel brownies, marshmallow and peanut butter brownies. Blondies (is that a brownie or a cookie?), red velvet brownies, brownies that are “outrageous” or triple deckered, which means it’s a stacked gooey tower of chocolate and other stuff drizzled with caramel or fudge or both. Plus boozy brownies with everything from bourbon to Guinness.

I love a unique and different brownie concoction, but this recipe is not those brownies. Not even close. You aren’t going to read the ingredient list and say “wow, I would never think to put that in a brownie”. And you’re not going to use a huge chunk of the grocery budget on the ingredients found here. In fact, on first glance you might decide this is nothing special and be tempted to move on when looking for that dessert to impress your guests this weekend. Take a second look here, my friend. 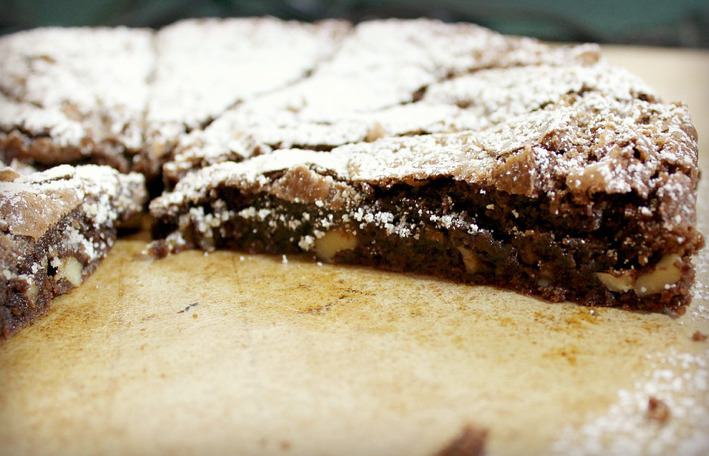 This brownie recipe is not new and trendy. It’s just a  simple, timeless classic, and it’s delicious and moist and chewy in all the right places. This recipe comes from the tattered recipe file in my kitchen. On an aged and yellowed index card, this recipe is written in my grandmother’s handwriting who started making these simple brownies a long time ago and then my mom made them for my brothers and me when we were little (what seems like not a long time ago).

My mom did change the recipe, sort of, when I was a kid. You see, until I was about 8, I thought all brownies were supposed to look like a slice of pie. That’s because my mom always baked the recipe in a pie plate. And since this recipe is so easy that any time we wanted brownies, she would just whip some up. I never had brownies from a store or bakery and assumed everyone was eating the pointy triangle-shaped brownies (I still remember seeing my first square brownie and not thinking it was a brownie). It wasn’t until years after that I found out the only reason she made them in the pie plate was because she didn’t own a square pan and the pie plate was a perfect stand-in. She did have several pie plates because she also made the world’s best pies. 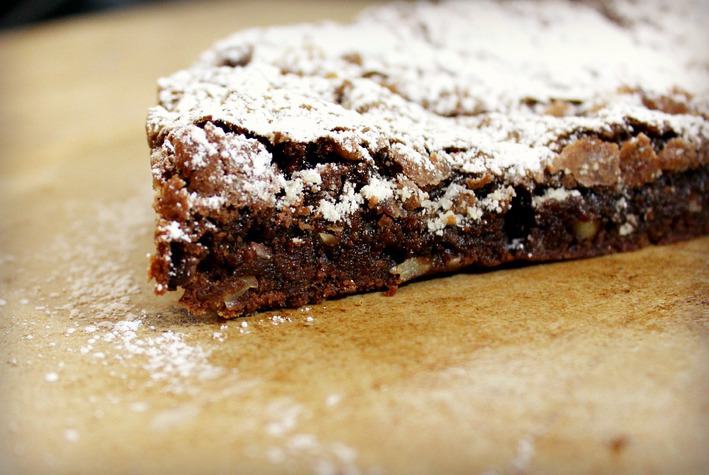 Fast forward to a few weeks ago and I was about to make brownies in my square baking pan like all the rest of the normal world, and suddenly remembered my childhood brownies. I shared this little story about brownies-in-the-round with my 11 year-old. He requested the round-pan version and after making my first batch of round brownies in so many years, I wondered why I hadn’t made my mom’s version a tradition. Look how rustic yet special they are when cut like this. Sprinkle them with powdered sugar and add nuts if you like. Round or square, the real point of this story is a super moist and delicious brownie that doesn’t have to include 17 different ingredients or be twice-baked, or have frosted swirly cream cheese ingredients. Trust me. The next time your family asks for some brownies or you need to bring a chocolate dessert to the party, whip up this simply classic recipe. You won’t be disappointed. And if you’re so inclined, why not make them in-the-round? 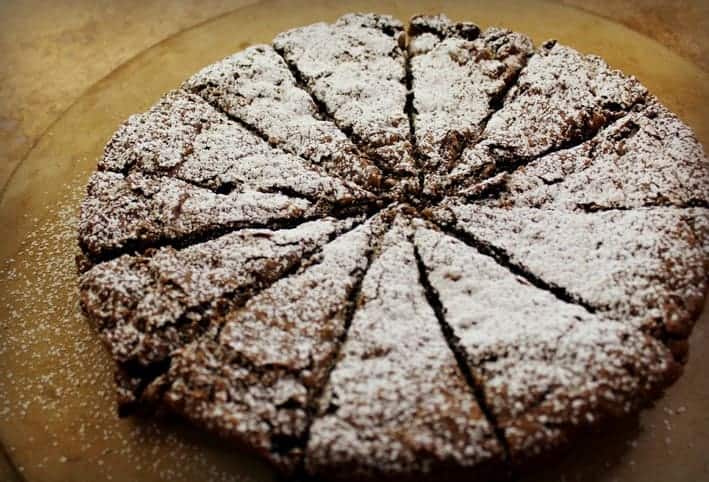 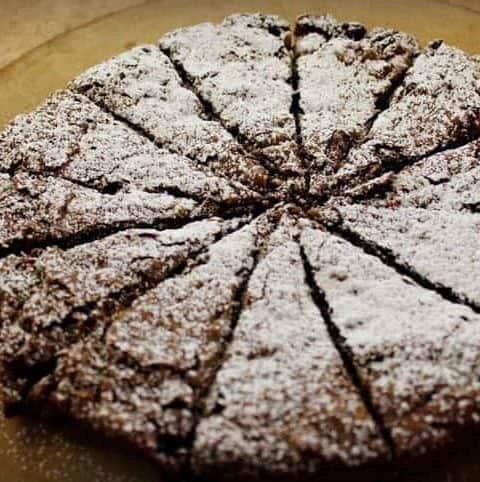 This brownie recipe is as simple as it gets. But they're moist, delicious and incredibly chocolatey. Plus, they make up in no time.
Course Dessert
Prep Time 5 minutes
Cook Time 25 minutes
Total Time 30 minutes
Servings 12 3-inch pieces
Calories 213
Author Good Dinner Mom