Waffles of Insane Greatness are crisp but light and tender. Vanilla and buttermilk make them delicious; let the batter rest for 30 minutes before baking.

I recently came across this Food52 Genius recipe for Waffles of Insane Greatness. The waffles, with the best name ever, originate from a restaurant called Aretha Frankenstein in Chatanooga, Tennessee, also the best name ever. The restaurant is a small converted house with four tables and a seating bar. I was kind of disappointed to find out Aretha Frankenstein wasn’t a namesake. Because I could picture a fierce woman such as Ms. Frankenstein. But, let me tell you how these beauties are aptly named and also make sure you promise to get them into the iron ASAP. 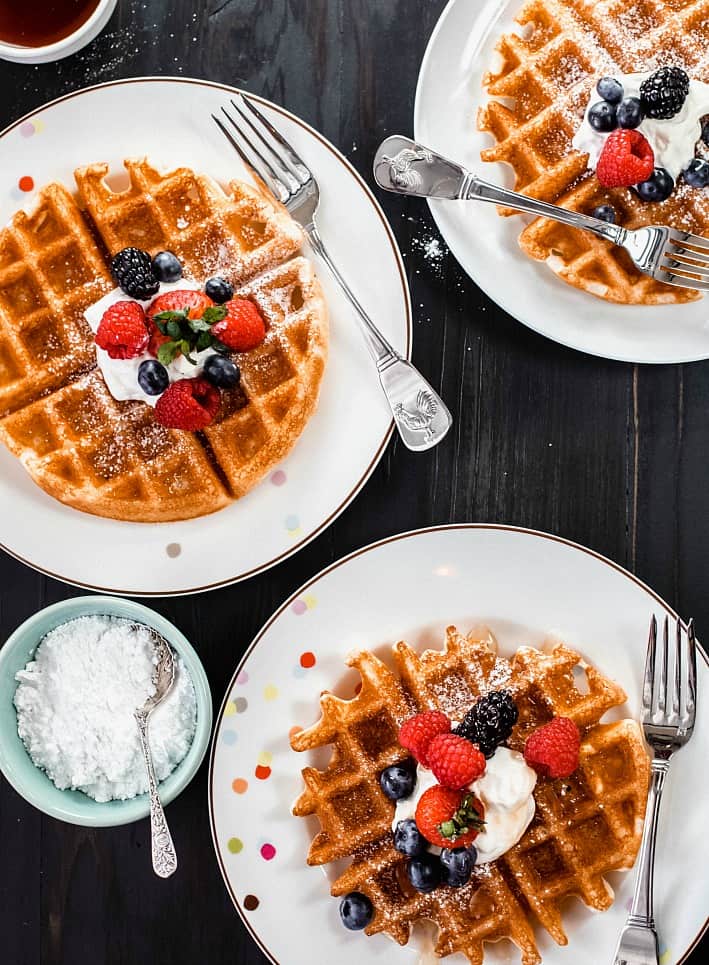 The waffles are not just mix and pour, but will still be on your table in no time, perfectly tender and moist on the inside, with a crisp, be it thin, crust.”Like an eggshell” according to the Genius Recipes crew. Sounds insanely great, right?

The secret to perfect waffles

The secret is two-fold; first some of the all-purpose flour has been replaced with cornstarch to tamp down gluten formation a bit. Second, and super important- after you mix this simple batter, let the batter rest for a full 30 minutes. If you don’t let the batter rest as needed, the waffles don’t attain the airiness and crisp crust that makes them insanely great in the first place. Also, the batter will yield a full waffle less if you don’t wait. So, I mix the batter and while it’s resting, make my morning joe, get the toppings ready and heat the waffle iron. Before I know it, the 30 minutes is up and my family is about to taste the best, almost yeast waffle-like, but not yeast waffle overnight-wait, waffles. 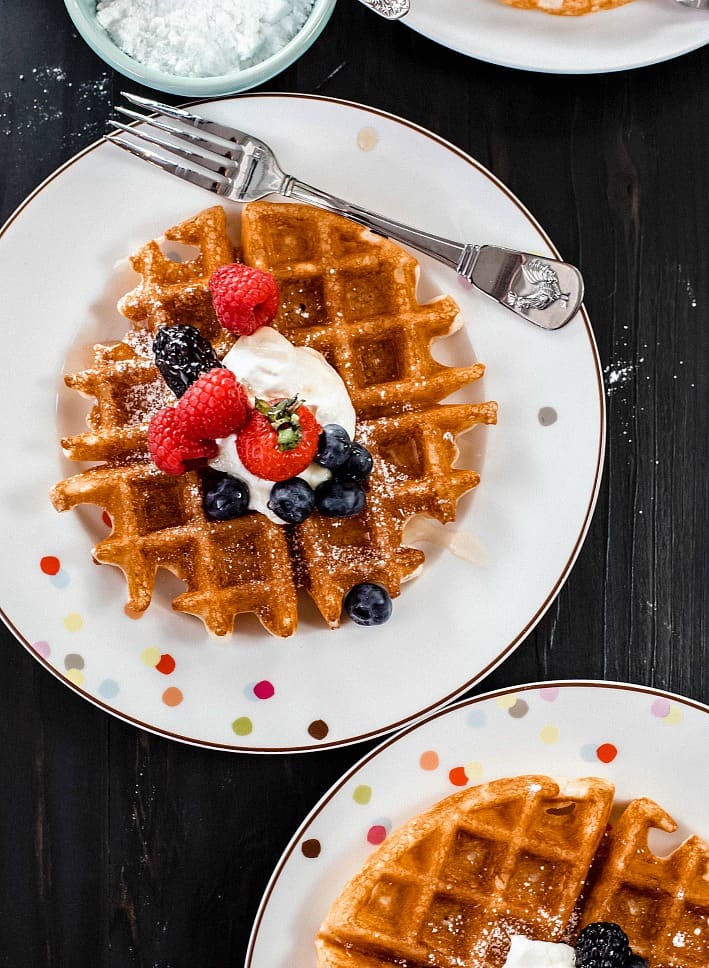 Besides the fabulous texture I just told you about that’s truly insane (I’m using this word too much to make sure you know how good they are), let me tell you about the delicious, just right, flavor. To the batter, I added a teaspoon of vanilla and I recommend using buttermilk for your milk option. The tang from the buttermilk is perfect paired with the vanilla for “oh my word” deliciousness. I’ve tested several milk options, so even if you don’t have buttermilk- pour your regular or nut milk into the measuring cup and add a tablespoon of white vinegar or lemon juice. 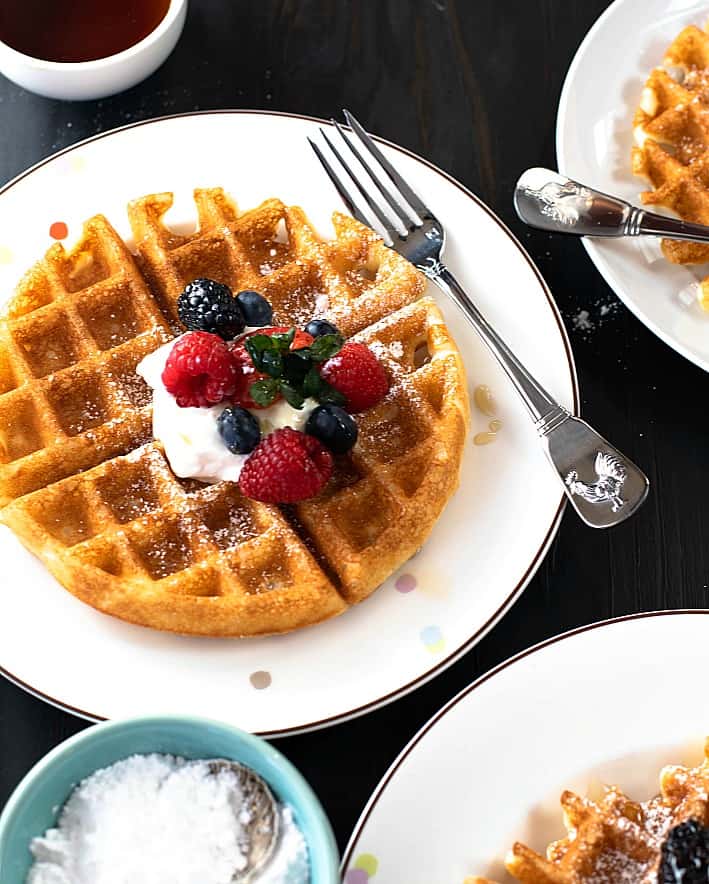 What is the best waffle iron?

Your waffle iron is pretty important here. I recommend using a Belgian Waffle Iron and this Cuisinart Belgian Double Waffle Maker is a game changer, making two full deep Belgian waffles at the same time, but if you have a standard waffle iron, your waffles will be pretty darn insane too. One batch of batter makes four waffles, again only if you let the batter rest the full 30 minutes. If you want to double the recipe for a crowd, I recommend making two bowls of single recipes. The waffles brown perfectly pretty quickly; at least in my waffle iron, only taking about five minutes. AND!… the waffles reheat wonderfully.

Can waffles be made ahead of time?

If you have extras that you want to save or if you’re wanting to make some ahead of time, bake the waffles until not quite as brown as you’d serve them and let them cool completely on a wire rack. Store in the fridge in airtight bags or a container and when you’re ready to eat more, simply reheat the waffle iron, place the pre-made waffles in the iron and cook only a couple of minutes until heated through! You can also heat them in a toaster, but I find reheating in the waffle iron gets them heated without burning any edges and actually is quicker than in a toaster. 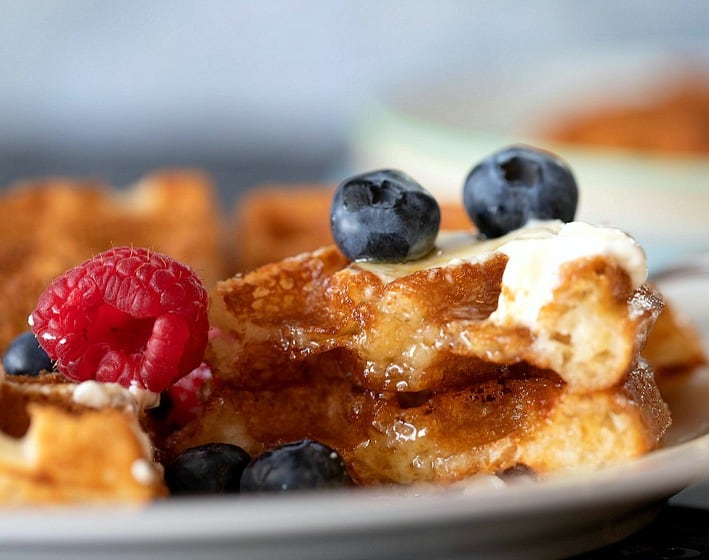 What toppings should you put on waffles?

Let’s talk about the toppings for these (I won’t say Insane again) waffles. Serve with toppings of butter, real syrup (warmed!), and berries. But have you ever had sour cream on waffles? I’m here to tell you you need to try it because sour cream on really good waffles is A-Maze-ing! I was turned on to this perfect pairing when my awesome friend and backyard neighbor handed me a sample of her family’s delicious sourdough waffles (another crazy great waffle recipe I’ll share some day). She had the waffle holes lightly filled with just enough sour cream and drizzled with syrup, telling me that it was something her dad had introduced to her years earlier. And let me say, now my house will forever be eating waffles topped with sour cream. Every waffle pictured here is topped with sour cream. Whatever you top them with, be sure to try Aretha’s Waffles of Insane Greatness. 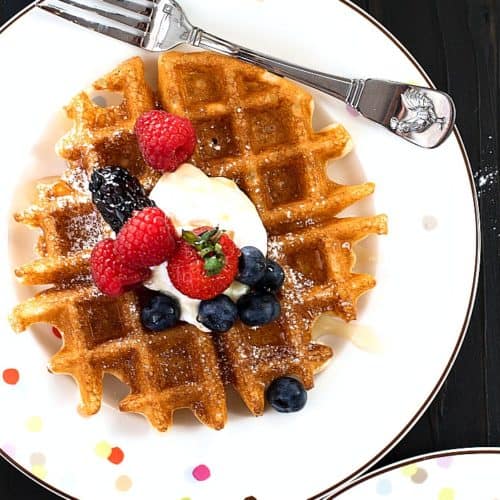 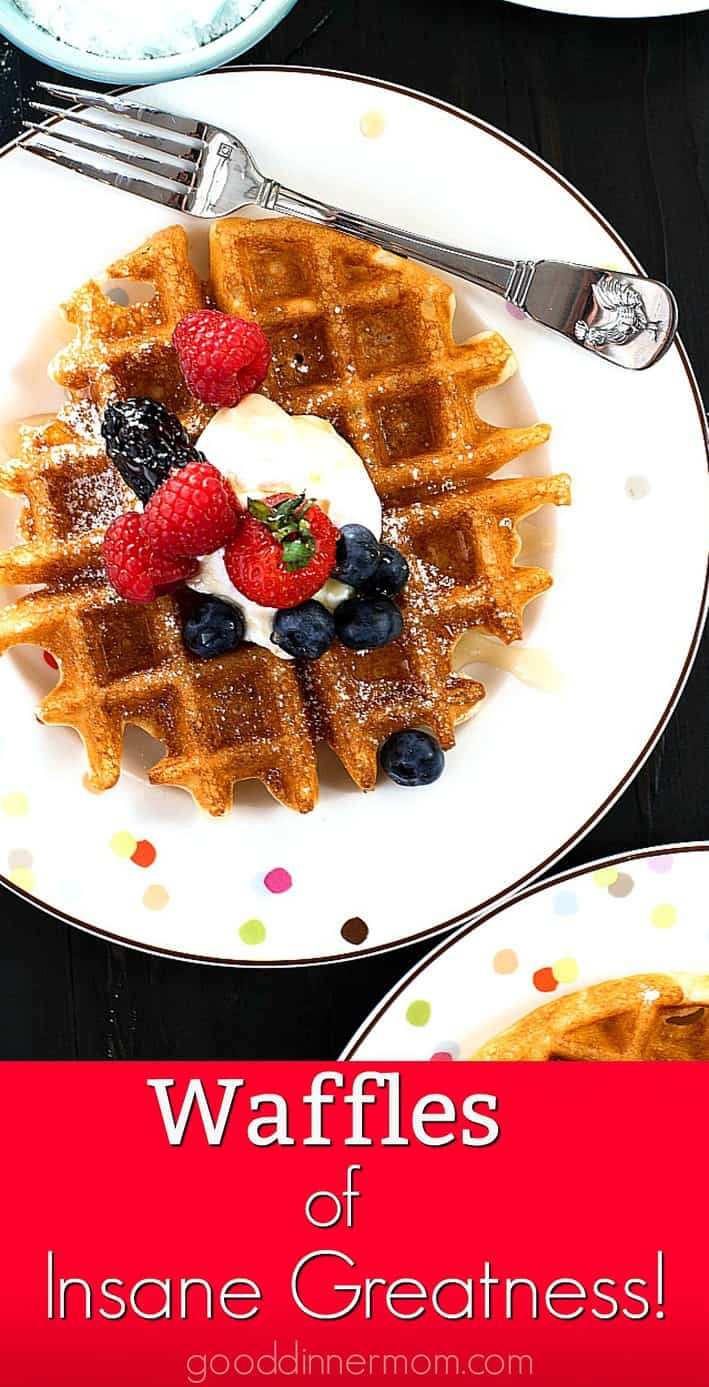