I recently ordered a bowl of French Onion Soup at a favorite local pub that for years has been known for theirs. What I got was a thick layer of melted cheese on a slice of bread that had soaked up most of the weak broth underneath with a scant serving of onions. Maybe it was just a bad night, but I was left wanting… and this experience sent me on a mission: Find the best French onion soup recipe that I can make at home. After some trial, error and disappointment, success is mine. And now it’s yours too. 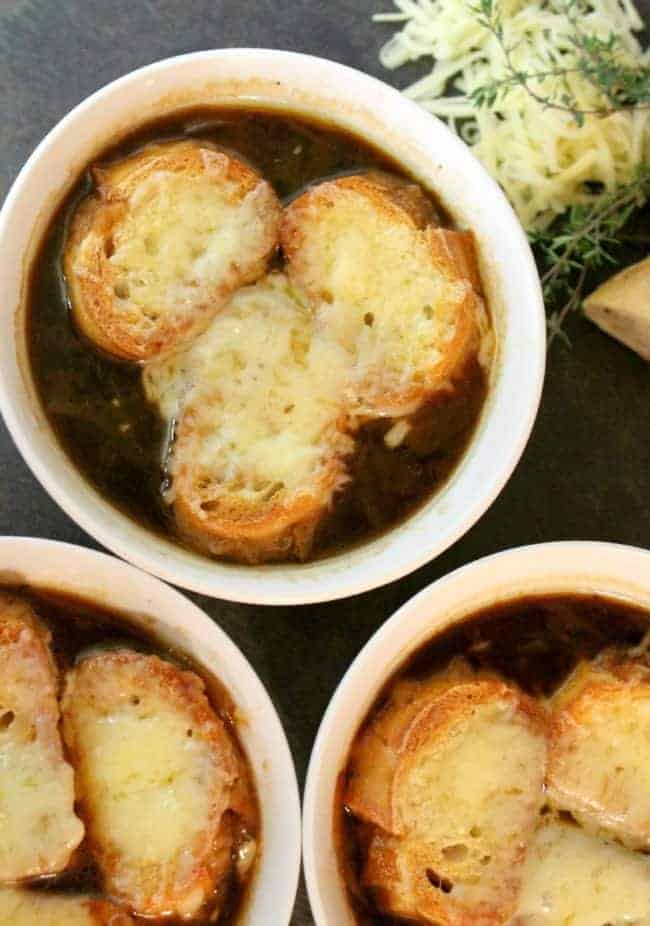 This recipe comes from America’s Test Kitchen and I should have just gone there first. They do all the research; testing several types of onions as well as coming up with the best cooking methods. I mean, they are the TEST kitchen. The success of this recipe is based on creating a deep, crusty caramelization with the onions, also known as fond. After following this recipe (courtesy of Christopher Kimball’s house guest from France), let me tell you how fond I am of onion-fond! (You knew I had to go there.)
The recipe requires a bit of pre-planning but it’s extremely easy. You do need to start early, and monitor it periodically until the active hands-on portion during step three of the printable recipe. 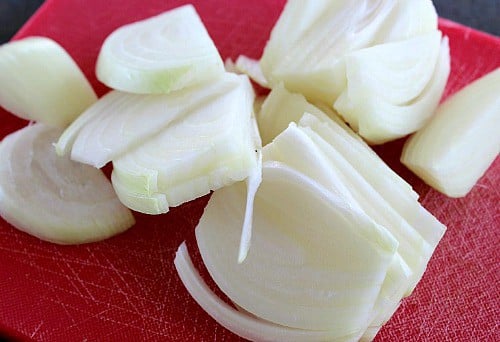 Start with about six large yellow onions, sliced pole to pole. See note below on crying over your onions. Do not use sweet, white or red onions. They each have less than stellar results. So, nice round yellow onions it is for this recipe. After the onions are sliced (not too thinly), spray a heavy bottomed pot (at least a 7 quart size) with cooking spray (cast iron is what I use), place butter in the bottom and fill it with your onions. You will add a bit of salt here to help sweat the onions. Cover and cook in a 400 degree oven for an hour. Your house will start to smell amazing right about now. 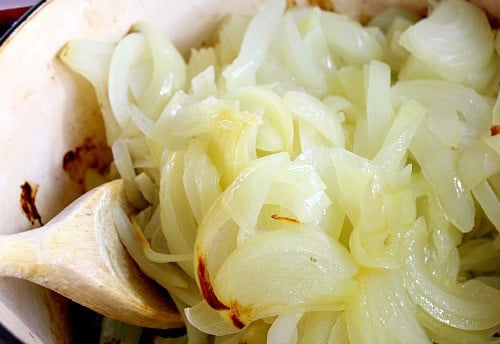 Here they are after the first hour in the oven. Those onions that totally filled your pot have started to sweat down and are beginning to caramelize to the sides of the pan. Give them a good stir, crack the lid about an inch, and put them back in for another 1 1/2 to 1 3/4 hours, stirring again after one hour. 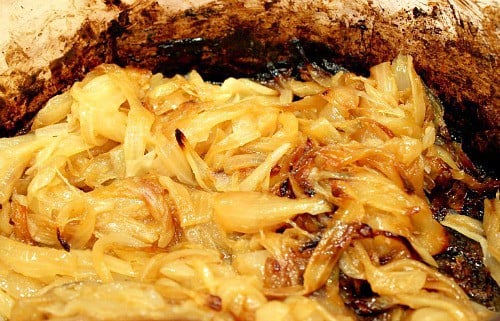 Now there is a heavy crust (the fond I mentioned earlier) that is starting to form and your onions are totally reduced. At this point, you’re going to cook them on the stove top, to draw out more of the moisture and deglaze the fond from the pan. 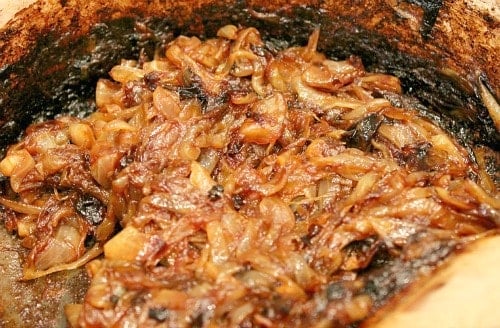 You will add water and deglaze at least three times as the onions continue to brown. The crust is THE flavor that makes this French onion soup recipe stand out. 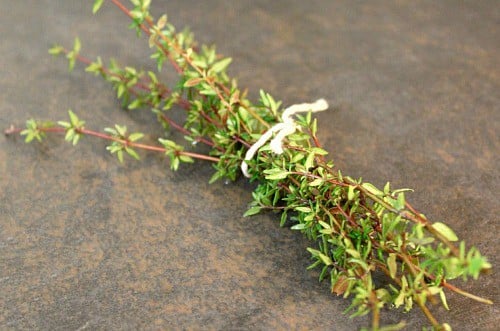 The deglazing portion was really the only active part of this recipe. Now you need a little bouquet of thyme sprigs and a bay leaf. Add this with your cooking sherry, chicken broth*, beef broth (just a bit) and water. Simmer on the stove top for 30 minutes. Finish off under the broiler with toasted, sliced baguette and shredded Gruyère.
This soup is super hearty and flavorful. My quest is complete. I hope you agree.

*Note: I’ve had people ask me why not just use beef broth here, assuming the beef broth will give deeper flavor. But that is not the case. This is French ONION Soup. Using chicken broth allows for the onions to shine in this soup. Trust me, the soup will have the perfect depth of hearty flavor. 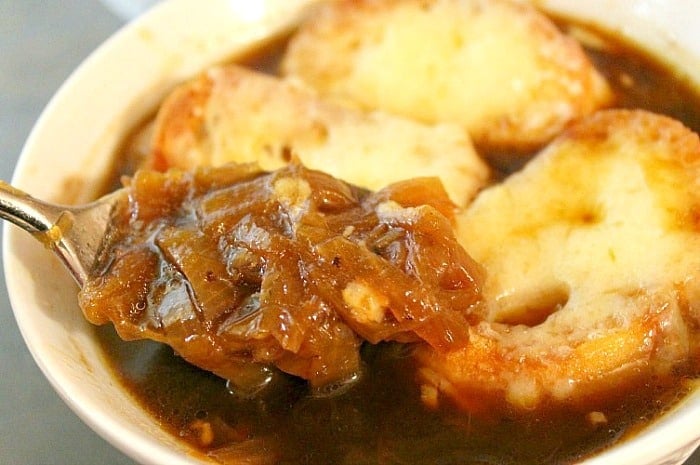 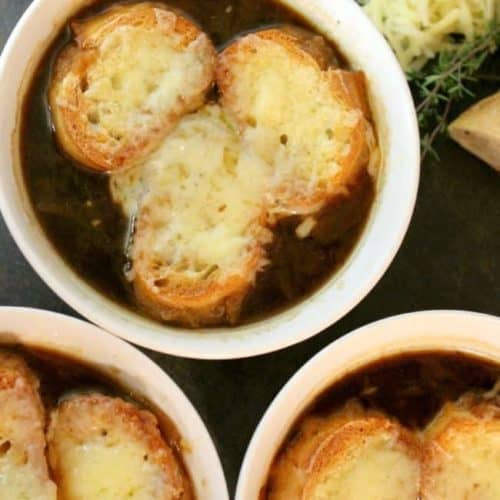 This is a delicious French Onion Soup. It's not difficult to make and the hands on process is mostly during the last hour of the recipe. The onions do require a lot of time in the oven to caramelize. But well worth it.
Course Soup
Prep Time 10 minutes
Cook Time 4 hours
Total Time 4 hours 10 minutes
Servings 8
Calories 103
Author Good Dinner Mom

A little note on “crying over your onions”. Many of us cry when slicing onions. It just happens. And the reason it happens is there are certain enzymes in onions that, when cut, release a sulphuric acid which irritates your eyes. There are many supposed remedies to prevent crying (light a candle, bite on a wooden spoon, freeze the onions). But the simple method that is tried and true: Protect your eyes. There are actually “onion goggles” out there you could buy, but just put on a pair of safety goggles or even swim goggles if you want ultra protection. Then you’ll look like you really mean business and you’ll stay dry-eyed through all 6 onions! 🙂 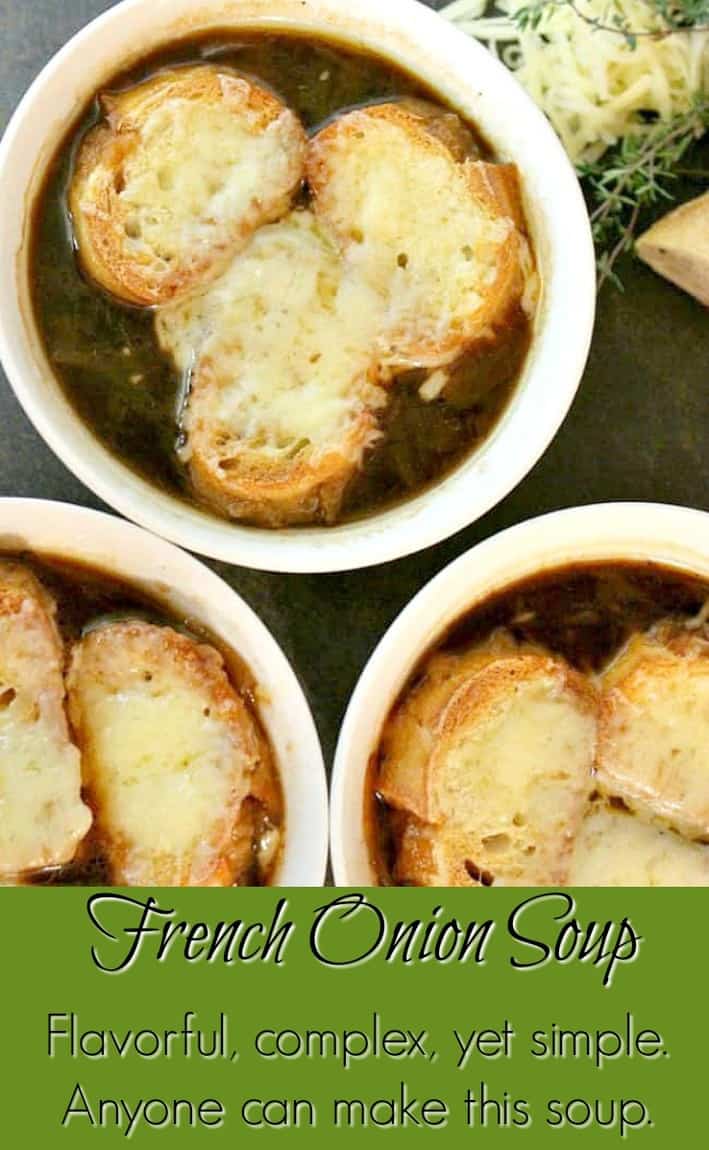