Chicken Tarragon Soup satisfies all the senses and cravings when it comes to comfort food. Incredibly easy to make, ready in no time.
But before we get talking about the soup itself, you might wonder… 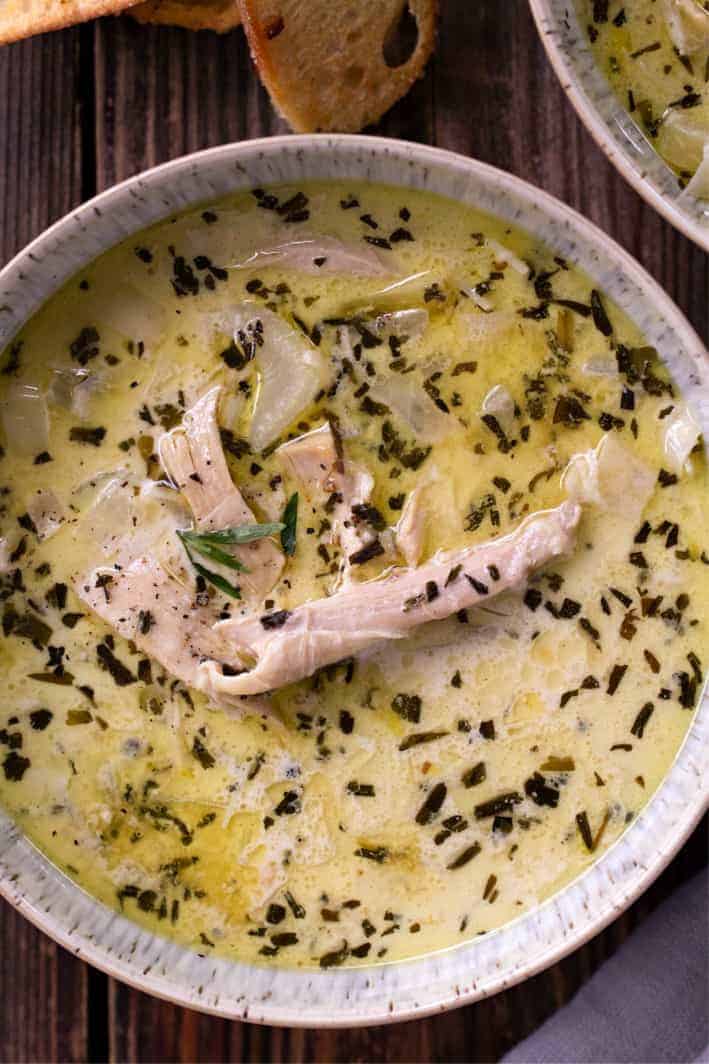 Tarragon, an herb that’s a member of the sunflower family (yes, really), has leaves that are long, flat and narrow. There are three varieties of tarragon- Russian, Mexican, and French, with Mexican tarragon being the most common and the variety I used in this recipe. It’s probably what you’ll find the most readily in your supermarket. This tarragon is both sweet and bitter, with a slight anise flavor which pairs wonderfully with poultry or fish, and in soups and sauces. Tarragon in this recipe for Chicken Tarragon is the singular “just right” herbed component that makes the soup irresistible. 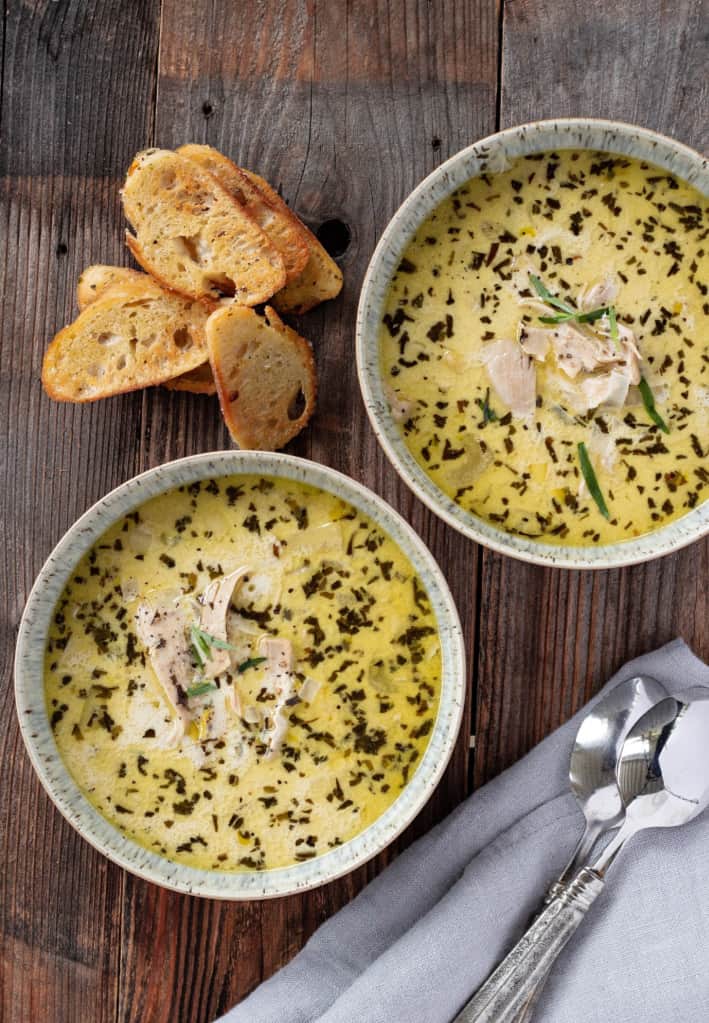 Okay, let’s make the soup. A combination of onions, garlic and leeks get sautéed until the onions are soft and the garlic is fragrant. Sliced celery gets added in for the freshness it imparts. I add the celery after the alliums because I want it to retain its raw flavor just a bit. Dried tarragon is added next, then remove the skin from bone-in chicken thighs and nestle them in the mix. The broth base consists of white wine, chicken broth, lemon juice and some heavy cream. Do you see where this is going? The combination of ingredients in this soup, including the flavor that will come from the chicken bones, is rich but fresh. Creamy without being heavy. 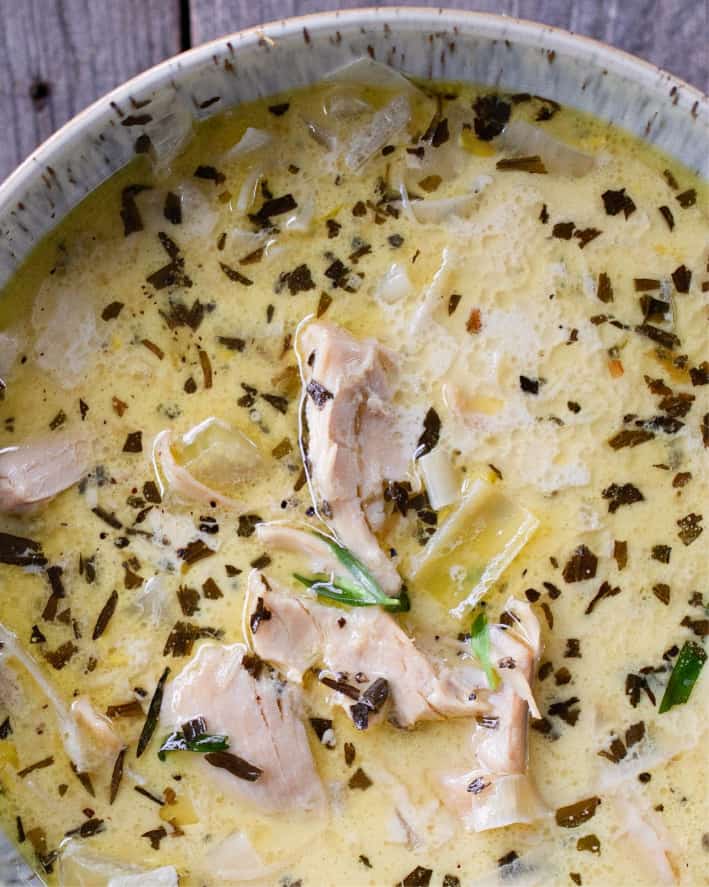 After the soup simmers for 30 to 45 minutes, remove the chicken from the soup, take the meat off the bones and return it to the pot for a hearty, rustic soup. If you want a soup that’s a little bit “fancy, before placing the chicken pieces back in the soup, using an immersion blender, blend the soup base until nearly smooth and then add the chicken back in. This method provides a more silky, rich soup base. Both options are delicious and my family couldn’t really choose which they liked better. They said they were both good in different ways. So, personal preference rules here. 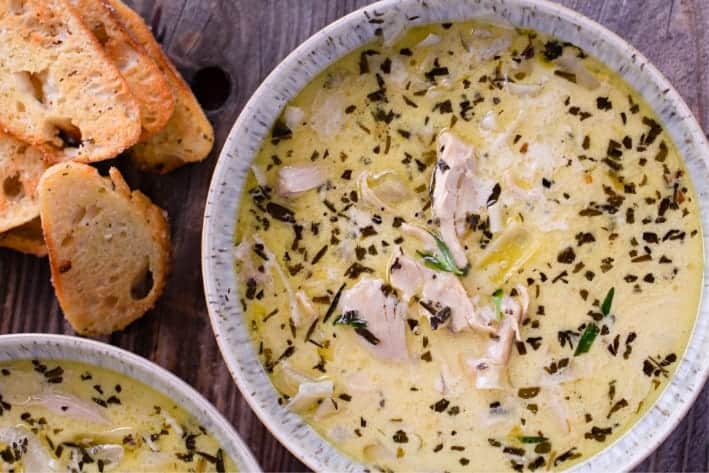 Another way that you might want to change up the Chicken Tarragon soup- if you like your soup with more broth or juice for dunking bread or crostini (or if you want to eek out an extra serving), I give instructions in the recipe notes for easily increasing the soup base during cooking.

I’ve made this soup so many times recently, tweaking it until we felt it had all the right textures and flavors, while keeping the recipe incredibly simple. Instructions that follow can be done on the stove or in your slow cooker (and will definitely adapt well to a pressure cooker). As you can hopefully tell, the chicken cooks in the soup to perfect tenderness. If you’re in an even bigger hurry or have some leftover chicken, you can make the base and add in the cooked chicken at the end for a 20 minute meal.

Save Chicken Tarragon Soup to your “Soup” or “Chicken” board and let’s be friends on Pinterest! I’d love to share tasty recipes with you.

Did you make this recipe? Leave a review!

This soup is ready in about 30 minutes, once the chicken is cooked and can be removed from the bone, but the chicken just gets more and more tender the longer you simmer it. If you can let it simmer for even a little longer, about 45 minutes, the flavors continue to deepen and become more comforting-good.
Course Soups and Stews
Keyword chicken soup, tarragon, winter soup
Prep Time 5 minutes
Cook Time 30 minutes
Total Time 35 minutes
Servings 4 people
Calories 562
Author Sally Humeniuk

Recipe adapted from The Winter Table. 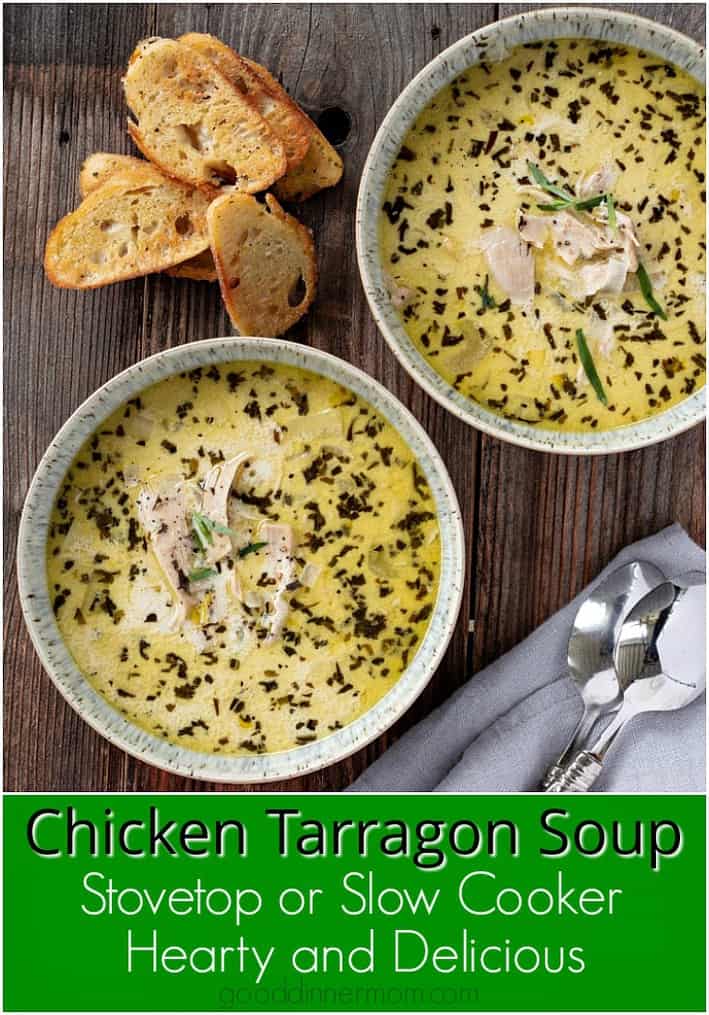