Cake doughnuts that are start to finish in no time at all, Blueberry Lemon Chia Doughnuts are super delicious and nutritious. No one needs to know they’re vegan. 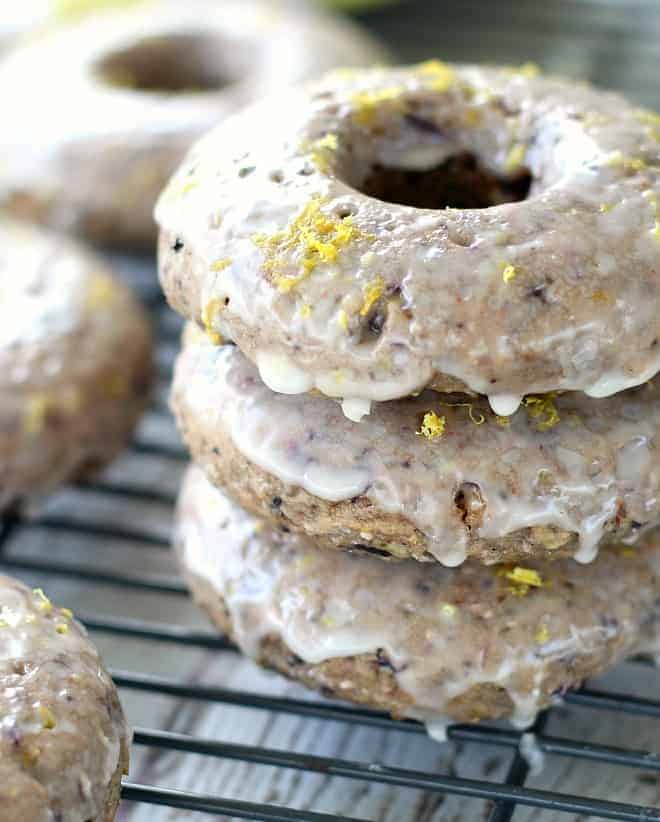 Don’t these baked doughnuts look tasty? Yes?.. well they are. Do they look to you like they’re vegan? No?… well they are! Doughnuts that are tasty and healthy (well, relatively so)? Yes, it’s true. If you’re skeptical that these aren’t going to fool anybody, or satisfy that coffee-and-doughnut, milk-and-dunk-a-doughnut, or “just give me something sweet!” craving – you’re not alone. I thought the same thing, but the recipe looked super simple and at least one member of my household loves the combination of blueberries and lemons. So, I decided to give them a half-hearted “try”. 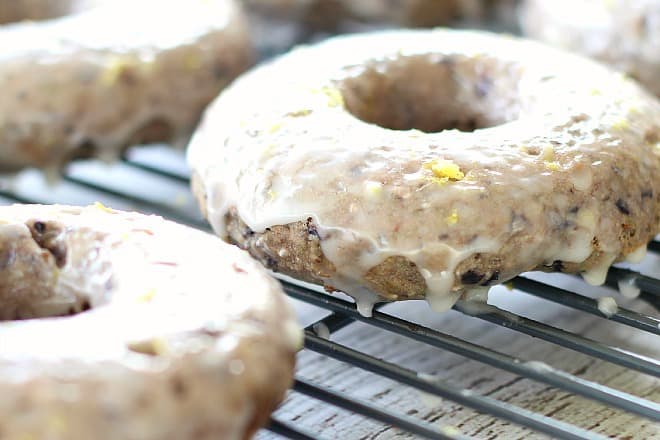 I’m now here to tell you I’ve since made these multiple times, experimenting with the original recipe just a bit. These Blueberry Lemon Chia Doughnuts will satisfy any doughnut-shop sweet craving and because of that, they won’t stick around for long. But since they whip up in no time, in almost one little bowl, you can just keep making more. Before you get started, you’ll need a baking doughnut pan, and I also recommend you have a large plastic bag for piping the batter into the doughnut molds before baking. This makes them lickety-split easy. 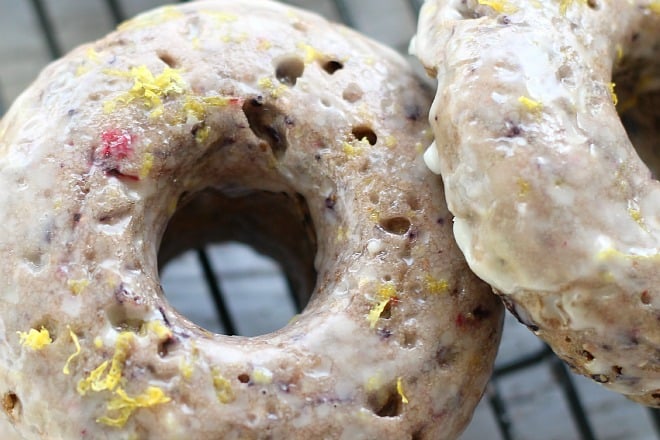 Fresh blueberries and lemon zest combine with a nice crunch of chia seeds (you could also add flax and unsweetened coconut). Just the right amount of nutmeg or cinnamon gives the perfect complexity to each bite. We did side-by-side blind taste-tests comparing nutmeg or cinnamon, and liked them both equally, so just use what you want. These are so fast that you could make one batch with nutmeg and one with cinnamon.The sugar glaze is best added after the doughnuts cool completely, but this doesn’t take long. A little extra lemon zest on top makes them look even more special. 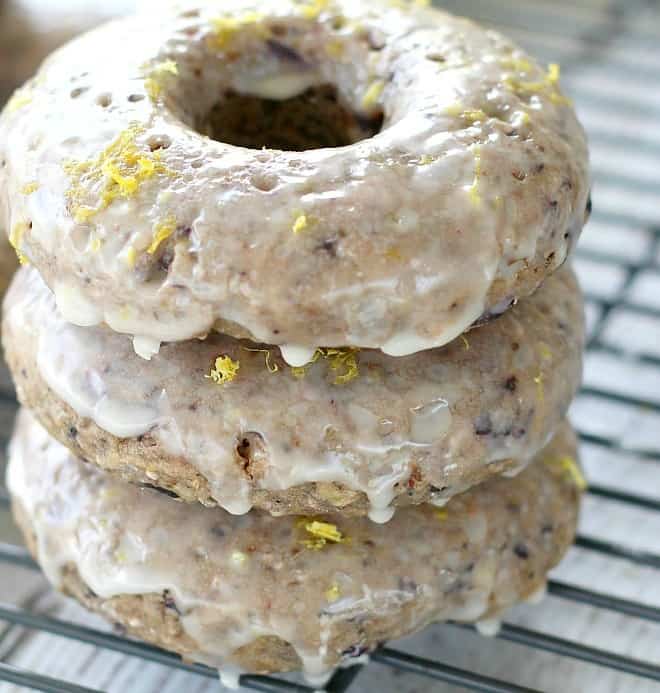 The Blueberry Lemon Chia Doughnuts have healthy benefits from the blueberries, lemon zest and chia seeds (fiber, omega-3s and antioxidants), and they’re better for you since they’re baked rather than deep-fried, but let’s be real. This is still a sweet treat. But doughnuts are usually loaded with sugar grams, which is a concern for me. These come out at about 7 grams per doughnut, which was still too much for my husband “sugar is the enemy!”, but still considerably less than most baked doughnut recipes I’ve found. For the sugar in the recipe, stick with brown sugar. I tried other options, but sweeteners like Stevia or honey have 19 grams per tablespoon vs. 4 grams for brown sugar or coconut sugar. You could cut the sugar down to 3 tablespoons rather than 1/4 cup and they’re still pretty darn great and the sugar grams then come down to 6 per doughnut. After all that information, those of you who know me know that I have many sweet indulgences on Good Dinner Mom that have no consideration for sugar grams, because I’m all about splurging now and then. The reason I mentioned the sugar grams here is, since the doughnuts are a vegan recipe and since some of the healthy benefits are mentioned, I wanted to give full disclosure about sugar content. So, now you can plan as you like after all that.

I’ve had my doughnut pan for a while now, and am just now getting around to using it. I’m so glad these delicious Blueberry Lemon Chia Doughnuts were my maiden voyage. Give them a try and you too will be making them over and over. 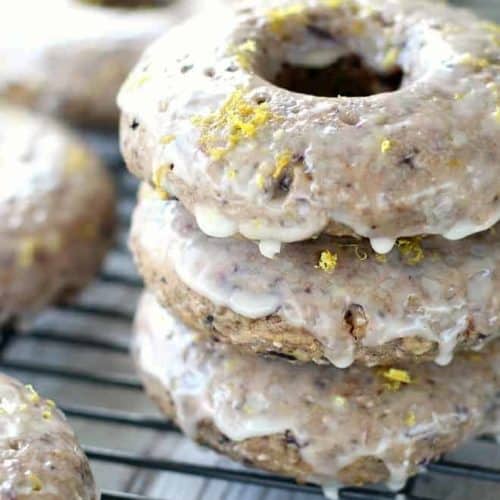 Special Equipment: Bonut baking pan. Cook's Notes: These taste best when baked until nicely golden. They won't appear very browned on top, but I would recommend baking for the full 12 minutes and then lift one donut up and check for color. Once these have been baked for at least 11 minutes, they are easily removed and replaced back into the doughnut pan.
Course Vegan Baked Donuts
Prep Time 5 minutes
Cook Time 12 minutes
Total Time 17 minutes
Servings 6
Calories 165
Author Good Dinner Mom